Litigation stemming from filings of Abbreviated New Drug Applications was stable from 2007 through 2013, oscillating between 203 and 294 a year, which makes 2014’s jump to 432 cases stick out like a sore thumb. What isn’t so clear is what the increase stems from, and whether it’s a sign of things to come or a fluke.

But first, what is an ANDA filing, and more specifically, the Paragraph IV challenge that results in these cases?

Abbreviated New Drug Applications, ANDAs, are one component of the Drug Price Competition and Patent Term Restoration Act of 1984, better known as the Hatch-Waxman Act, which was meant to do exactly what its name implies — create a faster, less expensive way for generic drugs to hit the market. 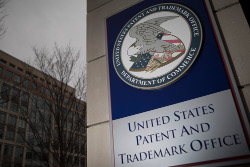 The U.S. Patent and Trademark Office seal is displayed outside the headquarters in Alexandria, Va. Photo by Andrew Harrer/Bloomberg

Under Hatch-Waxman, if a pharmaceutical company has a generic version of a brand name drug that they want to launch, they can seek a fast-tracked FDA approval, and in so doing they must check the status of relevant patents in a log called the Orange Book. Douglas Carsten, partner at Wilson Sonsini Goodrich & Rosati who heads the firm’s San Diego practice, said this search will result in one of four things:

· A Paragraph One filing, if no related patents are found at all;

· A Paragraph Two filing if patents for the brand drug do exist but have expired;

· A Paragraph Three filing if unexpired valid patents exist, but the generic company isn’t seeking FDA approval until they expire;

· A Paragraph Four filing if unexpired valid patents exist, but the generic company finds them to be invalid for some reason or believes their product does what the brand drug does in a different enough way to not infringe on said patent.

“In those circumstances, what the generic company does is file a Paragraph 4 certification,” Carston said. “When it does that it’s saying, ‘FDA, I did what you asked but the patents don’t cover what I do or are invalid for one reason or another. Look at my application now because I want you to approve the product before the brand patent expires.’”

Carsten said a total of 1,474 ANDA applications were submitted in fiscal year 2014, and data from a Lex Machina Inc. report found that 432 cases resulted from these filings — while that could in theory account from any Paragraph certification, only Paragraph IV would trigger litigation, so all 432 cases can be seen as stemming from Paragraph IV filings.

Once a generic company files with the FDA, Carsten said it typically takes between four and six months to go over the forms and decide if the patent challenge warrants a closer look, in which case the generic must go to the brand company and essentially alert them that they’re seeking approval to infringe on their patents.

“The brand company has a choice — decide not to sue at all, or they can decide to sue,” Carsten said. “If they’re going to sue, they have an incentive to sue right away -- I mean within 45 days of getting notice. What’s at risk there is if they do file a complaint within 45 days, they’re entitled to an automatic 30-month stay, meaning the FDA cannot approve the generic application for at least up to 30 months, or until the generic wins a court case if that happens first.”

As is the case with patent law in general, Paragraph IV cases are usually — about 85 percent of the time — settled outside of court. Local drug company Cadence Pharmaceuticals (Nasdaq: CADX), which was sold to Mallinckrodt last February for $1.3 billion, is a perfect example of how firms use Paragraph IV, and how things shake out.

Co-founder Ted Schroeder said the company filed two Paragraph IV applications — “an interesting innovation in our intellectual property laws in the U.S. where you can challenge a pharmaceutical patent the day it’s approved” — one of which was settled roughly an hour after the market hearing results, and the second won in court. Schroeder said these wins were vital for both cash flow and buyout interest.

“When that patent was settled, suddenly inbound calls started to arrive … So it was really on the back of winning this patent and closing the IP that some interesting parties showed up,” he said.

So why did the number of Paragraph Four cases skyrocket in 2014? There’s a variety of opinions on that, but no definitive answer.

Chad Shear, a principal at Fish & Richardson, postulated that the use of so-called “protective suits”— whereby the brand company files suit in both the jurisdiction of its choice as well as the jurisdiction where the generic is located in order to avoid the court tossing out the suit on grounds of no jurisdiction, and thereby losing its 30-month stay — may have been on the rise.

“There is something that happened in 2014 that may have made people use protective suits more,” Shear said. “In January, 2014 the Supreme Court issued its Daimler vs Bauman decision that seemed to narrow personal jurisdiction, and it scared a lot of litigators.”

While Shear couldn’t say for sure if that triggered an increase in protective suit filings, which would essentially double the number of ANDA cases on record and weren’t weeded out of the Lex Machina data, he said it was certainly a possibility. Shear also said he’s noticed generic drug companies becoming more aggressive in the last decade or so. While they used to only go after products with a roughly $100 million revenue minimum — they would only see a portion of that as a generic drug — he said he’s seen companies filing for generics for branded drugs only bringing in $20 million to $30 million, which could also explain part of the increase.

Carsten posited it might have to do with a larger-than-average number of never-before-approved blockbuster drugs coming online with a new chemical exclusivity patent that a large number of generics would all file for on the first day in order to take advantage of what’s called the First To File clause: “If you’re the first to file as a generic company, if you prevail in the case you’re entitled to 180 days of marketing exclusivity before any other subsequent ANDA application is able to be approved.”

So you could see a handful or even a dozen companies wanting to market a generic using that chemical profile, all filing ANDAs on the first day.

A counterintuitive peak in patent filing back in 2012 may also play a role in the rise according to Vicki Norton, a partner at Duane Morris, since the timing of those patents would mean many are starting to become eligible for ANDA filing, especially as the median age of the patents being litigated: a Lex Machina report found that at five years, the median age of patents litigated in 2014 was the youngest ever, a 50 percent drop since 2010.

While all of these possible explanations are just that — possibilities — Norton said you can be pretty sure patent trolls aren’t playing a part.

“You can’t really have patent trolls filing ANDAs because you have to show bioequivalency of the generic, so you have to be doing something in lab, unlike other areas of tech where you can do things purely on paper,” she said.