No one ever gets tired of winning. When you are used to winning, the pressure grows to keep winning.

Fortunately for the Associated Builders and Contractors San Diego, its apprentices continue to bring home medals from the nation’s most prestigious competition for construction craft professionals, the ABC National Craft Championships. The competition brings together top apprentices and trainees from across the United States who vie to be named the best in their trade.

This year at the 2015 edition held in Fort Lauderdale, Fla., three local craft champions from San Diego were among the 200 apprentices competing for medals in 11 craft categories. 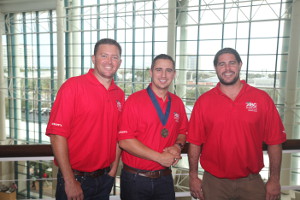 Strahler and his ABC San Diego Craft Champion teammates, including electrical champion Daniel Siordia of Clairemont representing Rowan Electric in San Diego; and plumbing champion Daniel Baldwin of El Cajon representing Interpipe Contracting, faced off among national finalists from local, regional and state competitions around the country. Prior to the competition, each spent several weeks studying and practicing his skills at the ABC Apprenticeship Training Trust lab facilities in Poway. They received guidance and tips from ABCSD’s instructors and previous competitors.

While it feels great for everyone involved, there is a lot more to the competition than bragging rights. The competition validates the career training process and helps promote the value of careers in construction. The two-day competition includes both a written exam and a hands-on, practical application where competitors demonstrate their high-level skills and safety best practices. The competitors must complete all work including sophisticated mathematics without calculators.

“These competitors are already committed to a challenging training program,” Yarbrough said. “They then make time to train and study to prepare for the competition. They have to fit it all in around work, school and family. The rewards are modest when it comes to prizes, but the professional satisfaction of knowing you are among the best in your field is something they can take pride in. Their employers do, too.”

A conference highlight, the ABC National Craft Championships event started in 1987 as a way to recognize the high quality of craft training in construction careers. To compete in the national event, contestants must first complete hundreds of hours of classroom training and thousands of hours of practical field experience to be eligible for preliminary local competitions.

ABC is committed to developing a world-class construction workforce and we are thrilled to provide the best craft trainees and apprentices in the industry an opportunity to showcase their abilities. Construction remains a tremendous career opportunity for millions across the country.

As the need for skilled workers grows, many countries recognize the importance of promoting the positive aspects of a career in the skilled trades and the need to overcome long-held stereotypes that a university education is the only route to financial, personal and social success.