'Father of the Internet' on its past, present, future

Vint Cerf, the “father of the Internet” and chief Internet evangelist at Google (Nasdaq: GOOG), stopped by the University of California San Diego on Tuesday to share his insight into the economic evolution of the Internet, existing challenges facing the Internet infrastructure and new advances on the horizon.

Cerf, who worked on ARPA.net at UCLA and was instrumental in designing the Internet at Stanford University in 1973, has received numerous accolades for his developments, including the Turing Award, Presidential Medal of Freedom and the National Medal of Technology.

He spoke at a UC San Diego Economics Roundtable about some of the key technical and economic advancements that allowed the Internet to become the tool it is today, with an estimated 3 billion users on as many as 15 billion devices.

The initial economic inventive that kick-started the technology came in the 1960s with the advent of departmental computers. Whereas the mainframes necessary prior to this breakthrough cost millions of dollars and needed to be housed in air-conditioned facilities, departmental computers sold for a mere $100,000 or so — a significant cut.

As the Internet switched from a hub of connected federal exchanges to a commercial network in 1989, Cerf undertook an experiment that would change the face of communication by reducing costs. 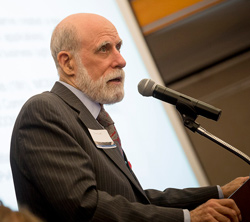 Vint Cerf spoke at UC San Diego on Tuesday about the economic evolution of the Internet, existing challenges facing the Internet infrastructure and new advances on the horizon. Photo by Erik Jepsen/UC San Diego

“Around 1988, I asked permission from what was called the Federal Networking Council made up of government authorities paying for different parts of the Internet, for permission to connect MCI Mail — a commercial service I had built for MCI in 1983 — to the NSFnet as an experiment to see whether the commercial email system could interwork with the Internet’s email,” Cerf said.

He got permission and that gateway for email began operating in 1989.

“As soon as we make this announcement, all of these independent email services said, ‘We want the same privilege,’ and they all got hooked up through gateways to the Internet,” he said. “Suddenly, everyone on all those independent email systems could exchange traffic with each other through the Internet, so it literally changed the face of economics because eventually email service became sort of a free adjunct, and you don’t find a whole lot of commercial mail services around anymore.”

Two infrastructure challenges then reared their heads: domain names in the 1980s, and IP address shortfalls in the 1990s.

Domain names, which were meant to provide an easy way of remembering locations online instead of memorizing their Internet protocol number, started as a free service sponsored by the National Science Foundation, but demand grew to a point that charging to claim a name made sense.

With no price point to compare to, the initial cost was set at $50 a year for two years to claim a domain name.

Cerf said what resulted several years later was the Internet Corporation for Assigned Names and Numbers opening an auction for names, which drew 2,000 applications, each costing $185,000 with no guarantee of getting the desired name.

He said this tension and the battle to determine who has access to what name under what terms and conditions is still ongoing, and can even lead to state-department level conflict. For example, who has the right to the .africa domain -- the African Union or a private sector company that bid on it?

On the IP front, it was a numbers problem that now has a solution, though users have been slow to transition to it. What’s called the Internet Protocol version 4 (IPv4), which uses 32-bit addresses to create 4.3 billion terminations for Web addresses, began to start running out of room in the early 1990s.

The Internet Engineering Task Force developed a 128-bit version called IPv6 which has 340 trillion, trillion, trillion address — “enough to last for a long time,” Cerf assured — but even though IPv4 address space from regional registries is nearly exhausted, the switch to IPv6 has been slow.

“We have been encouraging IPv6 adoption in parallel to IPv4 — we’re hoping to see some serious adoption visibly this year and in subsequent years,” Cerf said. “It’s taken us nearly 20 years to get to that point, but we are in a place where there might be an exponential need — we’re hoping that will be the case.”

While Cerf said the Internet of Things is an exciting development, it’s not all that revolutionary from a technology standpoint.

He recalled how the concept was joked about back in the 1980s, with someone even connecting a toaster to the Internet at the Interop conference purely for comedic value. The concept is now a reality and more practical.

The new frontier for the Internet is in interplanetary and interstellar connectivity to allow for manned space exploration. Work to develop an interplanetary system began in 1998 after the Pathfinder landed on Mars, and today is in operation on Earth, Mars, the International Space Station and the Epoxy space craft.

“What we’re hoping is once we standardize protocols, which is happening this year in the Consultative Committee on Space Data Systems, the space nations will use these protocols to repurpose the mission vehicles to become nodes in an interplanetary relay system after their primary scientific mission is completed,” he said.

Cerf said DARPA is currently funding a study for an interstellar mission.