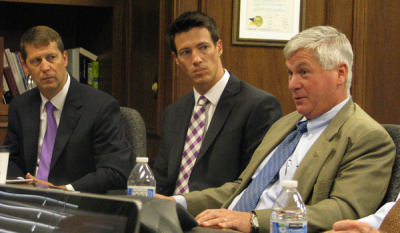 The influx of millennials into the workforce has prompted companies in a variety of industries to shift to more open offices.

Cubicle walls have been lowered or taken down, and rooms and areas where multiple people can work have been created.

But leaders of some the major law firms in the region recently said at a roundtable hosted by The Daily Transcript that they are hesitant to shift away from the traditional office for a variety of rationales.

Tom Turner, managing partner of Procopio, Cory, Hargreaves & Savitch LLP, said one reason he thinks law firms including his are reluctant to create more collaborative work spaces is because confidentiality is critical in the industry.

He begins his days reading documents and making phone calls that include discussion of confidential information.

“It is not really an option for me to be in an open space and share my conversations with everyone, and that’s the way it is for all of our lawyers,” said Turner.

Seltzer Caplan McMahon Vitek moved into its current location in downtown San Diego more than 20 years ago and designed it so the lawyers would have very large private offices.

Bob Caplan, president and a shareholder at the firm, said besides needing privacy for confidentiality reasons, lawyers value a comfortable space they can make their own while putting in long hours.

“They usually have long careers and you want them to be happy even though the space is expensive,” he said. “We by and large just do what they want.”

Gerald Schneeweis, a litigator and partner at Morris Polich & Purdy LLP in San Diego, said he doesn’t think open offices make sense for lawyers because they need the opportunity for quiet reflection.

He said that is especially true in a day and age when communication with other attorneys involved in a case is constant.

“It is good for us mentally to have a place where you can collect your thoughts and not have to be in the hubbub of everything to actually do the legal analysis,” he said.

Lawyers at his firm, which has a strong focus on real estate, have to work quickly to analyze and produce documents without unnecessary distractions in a very competitive market.

Fragomen, Del Rey, Bernsen & Loewy LLP is one law firm that is moving toward different styles of offices than the traditional law office.

The shift is a result of the international immigration law firm having many more paralegals than attorneys, with largely millennials being hired to fill the paralegal jobs, said Gary Perl, a San-Diego based Fragomen partner.

As the firm enters new offices in different parts of the country, it is making sure there are open workstation areas that allow for collaboration.

Fragomen is also offering employees desks that allow people to stand up rather than sit.

“It’s really bringing the walls down and letting a lot more light in,” said Perl.

Mike Hoeck, first vice president at CBRE (roundtable sponsor) in San Diego, said his company also has legal clients that are realizing some people work better in smaller groups where collaboration can occur.

One trend paving the way for law firms to create office spaces that can house multiple people is the reduction of interior functions like law libraries, he said.

He thinks a desire among millennials and others for flexible schedules will be one driver of the change.

“You can’t have an individual office for everyone who wants to work 60 percent of the time,” Pettit said. “You have to have some sharing of office space.

"I actually think we will get there," he said.

Some firms have been reducing the gap between the office sizes of higher-level attorneys and more junior associates, as well as splitting larger offices into two.

Other firms are also moving away from a past practice of maintaining a number of open offices for additional attorneys, said Hoeck.

“It is very expensive to carry real estate on a proactive basis in hopes that you are going to grow your practice,” he said.

But even if they are not maintaining as much extra space for new hires as in the past, leaders of the local firms said they are bringing on additional attorneys as the economic climate has improved.

“We have really seen it at Higgs Fletcher this year and the hiring has occurred in that regard, too,” he said. “I don’t know what it was. It was like a switch got flipped.”

Related content: The law firm office of the future