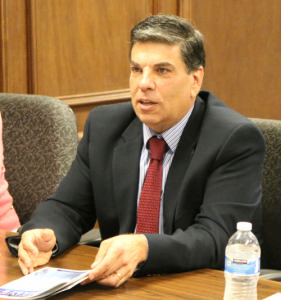 "We’re growing," Berg said. "The industry’s growing. It’s not even niche growing. Almost all of our members are seeing growth."

Man-hours among members, he added, have also increased, from about 2.5 million per year during the worst part of the recession to more than 4 million in each of the last two years.

Something separating the current growth from that of the pre-Great recession years, in a positive way, Berg added, is that the increase in workloads seems to be less bubble-related than during previous rise.

“It seems like it’s on a little firmer footing than we were on in 2007,” Berg said. “We’re not just building buildings for brand-new upstart companies that have never made any profit but their stocks are doing well. We’re actually building for solid companies that have been in town for a while.”

Chappell said that as someone who recently joined the Baker group of companies from being a mechanical engineer on the utilities side of the electrical industry, opportunities look to be expanding in midsize commercial solar installations. That's true, he said, even with the net energy metering caps and rebates going away.

"The financials are making sense,” Chappell, whose background includes building utility-scale power plants, said. “When these guys put stuff on their roof, it’s a power plant, and it’s subject to all the same rules as a fossil (fuel)-fired plant."

He said the time has come when clients understand a need to focus on energy efficiency prior to putting a solar energy system on a roof, similar to how utilities are encouraged by regulators to have energy efficiency and new renewable energy generation as parts of their energy portfolios.

That looks to be helping contractors build up new types of business opportunities.

“It’s tying in LEDs, tying in rewiring, tying in battery storage -- a whole bunch of things that really make businesses sustainable and energy neutral,” Chappell added. “So, we’re seeing a lot of work.”

The opportunity is there, he added, “however, you’ve got to do it right.”

Chappell worked the past six years with utilities on renewable projects, and said that 97 percent of those projects had failed prior to the recent improvement in the industry.

"That’s abysmal," he added. "That’s not the trend now. Even with the sun-setting of certain economic benefits, the business is moving.”

For specialized subcontractors such as Spencer, whose company, Audio Associates, focuses on low-voltage installations, workloads remained steady for somewhat longer through the last recession than for generalized electrical contractors. That's because once the firms dealing in higher voltage were done, work was still left on projects needing things including system integration and communications systems, which, he noted, includes almost any type of project.

Still, after eventually feeling the effects of the recession like everyone else in the industry, he's seeing a marked increase in business now.

"We're seeing a big push right now," Spencer said, highlighting a job he's involved in now to upgrade Palm Springs' airport from analog to digital. "San Diego just did it. … That was three years ago."

Schools are upgrading decades-old buildings at a good pace as well, he said, which means a good chance for continued work in the educational sector.

Davies said that at Davies Electric, the industrial and commercial sectors are remaining steady sources of work. From cellphone site upgrades to other commercial work, he noted the changes not only in the workflows during the past couple of years, but the way in which business is done in the industry.

"I joke (that) my guys don't carry binders anymore — they all have laptops and test equipment," Davies said. "The whole market's really changed for us."

Recent work Davies Electric performed at the San Diego Convention Center, in preparation for Comic-Con International, made an impression on him regarding how new technologies are infiltrating the industry.

"They set some world's record for data handled," Davies said. "The whole system stayed green over the four days. Especially down there with that clientele and that demographic, they're all laptopin' and phonein'. It's been really interesting and it's kept us really busy."

The energy efficiency component is one that has grown in importance not just in terms of building owners looking to maximize the effect of combining pre-renewable energy solutions with the addition of new energy, but also in terms of good business practices for electrical contractors, Berg added.

“You don’t have to wait to do one or the other,” Berg said. “You can say, ‘I will cut it in half so we can size your solar appropriately -- we can do them concurrently.’ The point is the costs go way down, because you’re not doing that huge power plant on the roof. You’re putting a much smaller one up, and you save at least double, probably four times as much in doing energy efficiency as you do when you go solar -- changing out some bulbs and ballasts, and putting in smart controls.

“It’s integrity,” he added. “You want to do business with somebody that cares about you.”

In discussing net-zero building, Chappell said he often describes to customers the gradual steps to increased efficiency that when combined with an energized generation system toward the end, can ultimately achieve the idea of a net-zero energy footprint.

“You analyze it and then you optimize it,” Chappell said. “When we do that, we own the client when we’re done, because we showed you a path from what I call net-100 -- and (for) net-80 you’re going to do these things; at net-60 you want to do these; net-40 do these and net-20 is window glazing, caulking insulation and miscellaneous mechanical stuff -- and then you go into an energize mode. And then you’ve really optimized his enterprise.”

Other changes have become clear since the Great Recession, including workforce quality and size.

"When you do apprenticeship graduation, that's a snapshot in time of what the economy was five years ago," Berg said. "This year, we graduated 23 apprentices. Five years ago was 2010. We know how bad things were then. We've already put in over 100 people in our apprenticeship program this year, and we graduate somewhere between 80 and 90 percent of the people we start in the program.”

Above that, Berg said NECA just conducted a round of interviews for the low-voltage side of the apprentice program and that for inside work, NECA San Diego will hold five or six days of interviewing during August.

"We're going to interview at least 300 or 400 people for probably 50 more spots," Berg said. "So you're talking about going from 23 (in this year's graduating class) to well over 100 five years from now. So I don't see, at least, a shortage of people in the field. We're probably getting four or five people for every one we take, and we're getting some very, very good applicants."

The concern, he said, is more on the management side, including project managers and estimators. NECA San Diego's recent retreat for its board of directors included strategizing for more management education.

"We're also looking to team maybe with other associations," Berg said. "We've been working with AGC (Associated General Contractors of America) — they have some classes that they offer, and we're going to try to team up with them to send our members to their program."

He also said it's possible that NECA San Diego will pursue programs and relationships with local universities similar to what it already has with San Diego State University, which has its own student NECA chapter.

NECA's apprenticeship program, which is conducted in partnership with the International Brotherhood of Electrical Workers Local 569, is taking in more apprentices than there are people retiring from the industry, Berg said, leading him to not worry about an ability to replace the baby boomers deciding to leave the industry.

Many progresses have been made legislatively in the past couple of years that have also helped the industry, Prescott-Loeffler said.

"I find that our legislation has been extremely progressive," she said. "All of the bills that I see come out of there has something to do — not all of them, but renewable energy bills, have an effect on what we do. As we go forward, we will benefit from their vision. But then of course at the same time, we need to be included at the table. Sometimes they have some lofty goals, and then we're left with trying to fulfill that vision."

Certain newer regulations that have been in some ways burdensome for businesses, such as Title 24 energy standards, also appear to be providing opportunities, Berg said, as he estimated the next three to five years to be “very solid” for the electrical contracting industry.