The two elements of Poseidon Water's Carlsbad Desalination Project are expected to soon converge to bring San Diego County up to 54 million new gallons of potable water per day.

In June, the first of those two elements was completed when construction crews in the joint venture of Kiewit Infrastructure West Co. and J.F. Shea Construction Co. finished building the 10-mile pipeline that will carry the plant's desalinated seawater into the San Diego County Water Authority's distribution system in San Marcos.

The second element, composed of the desalination facility itself in Carlsbad, on a 6-acre site adjacent to the Encina Power Station, is slightly ahead of the contractual completion schedule that calls for it to be operational by Nov. 26.

Poseidon's senior vice president, Peter MacLaggan, said in mid-August that the actual start of performance tests there will depend on how much time is needed for Poseidon and its development partners to complete the rest of the facility's commissioning process. 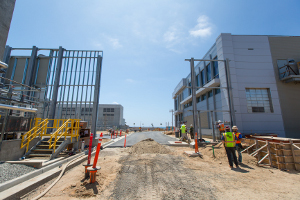 Construction crews work on the new water desalination plant in Carlsbad, which is scheduled to be operational by Nov. 26. Photo courtesy of Poseidon Water

"That could be halfway into September; it could be closer to the end of September," MacLaggan said. "But sometime in that timeframe, we expect we'll be ready to go into the performance tests."

Along with the Kiewit-J.F. Shea joint venture, known as Kiewit Shea Desalination, Poseidon has for more than two years been developing the $922 million plant in conjunction with Israel-based IDE Technologies, which has developed desalination facilities in Israel.

When completed, it's expected to provide about 7 percent of the San Diego area's water needs.

The performance tests process will last up to 35 days from its expected September start, MacLaggan said.

"We're looking at sometime middle-to-late October that we should be done," he added.

Power to the facility from San Diego Gas & Electric was turned on in July 2014. This year, Poseidon has worked its way through the plant's commissioning, as construction onsite is largely completed; MacLaggan said it was perhaps 98 percent complete in mid-August.

Final architectural enhancements and additions such as paving and landscaping have been a recent focus for construction crews.

The ongoing commissioning entails running water through all of the facility's pumps, valves and filters, and testing everything to make sure each works properly on its own and that instrumentation is reading correctly.

A milestone was met in early August when Poseidon finished loading the facility's reverse osmosis membranes and started placing seawater under pressure in the reverse osmosis system consisting of 14 vessel racks, or units.

"We're now making reasonably good water," MacLaggan said. "I think we've turned on about a third of the [reverse osmosis] units. There are 14 total. We're headed for the remaining nine of them to get them operational."

Though the reverse osmosis membranes, which were competitively selected by IDE technologies to come from Minneapolis-based Dow Water & Process Solution, have all been installed in the units housing them, their commissioning requires methodically pressurizing each rack, which includes 144 pressure vessels.

The rack is 144 of those in a bundle, each capable of producing more than 4 million gallons of desalinated water per day.

"You need to introduce seawater slowly to each one, one at a time, and make sure that you've got everything working properly before you focus on the next," MacLaggan said.

The entire reverse osmosis system is expected to be operating by the end of August, allowing Poseidon to focus attention on other components downstream in the facility.

Once the fresh water is produced, further treatment is needed to make the water more suitable for consumption.

"It's actually too pure to put in the pipeline," MacLaggan said. "If you put that water in without further treatment, it would steal the minerals from the lining of the pipe, and that's not a good thing."

To keep that from happening, the facility includes systems to add some alkalinity and hardness back to the water to stabilize it, and to adjust the pH levels.

The water will be percolated through limestone chips to build up its alkalinity and hardness, and some carbon dioxide will be added to adjust the pH.

The water will also be chlorinated and fluoridated to help keep it disinfected while it is traveling through pipelines and to cut down on tooth decay in its drinkers.

A series of eight pumps will send the water offsite from a large storage tank, and the water will from there travel into San Marcos to the Water Authority system.

The performance tests hoped to begin by the end of September will involve running the entire plant as a combined unit at full output capacity.

The testing will in part determine how efficient the facility is with electricity.

MacLaggan said one of the more advanced technologies used in the facility is a device manufactured by the San Leandro company Energy Recovery. It's made to capture the latent power in the outgoing brine stream created when the fresh water is separated from a roughly equal amount of brine through the reverse osmosis process.

"Much like a hybrid car, [it] recovers that energy and recycles it back to the front end of the treatment process, and in the process of doing so, lowers the energy footprint for the entire desalination plant by about 33 percent," MacLaggan said. "It's pretty remarkable, given the way they can effectively capture the latent energy in the brine stream — 96 percent of it — and put it back to work in the plant.