The Lilac Hills Ranch project was recently described by one planning official as the most significant land use matter to come before San Diego County’s Planning Commission since an updated general plan four years ago.

Accretive Investments’ proposal calls for the building of more than 1,700 homes on 600-plus acres of agricultural land near Valley Center and Interstate 15 and is expected to put the county's revised planning blueprint to the test.

Of the housing units, more than 450 would be age-restricted for seniors, and the development would also feature 90,000 square feet of commercial, office and retail space.

Earlier this month, the massive project that has been in the works for more than a decade finally received its first public hearing before the Planning Commission. 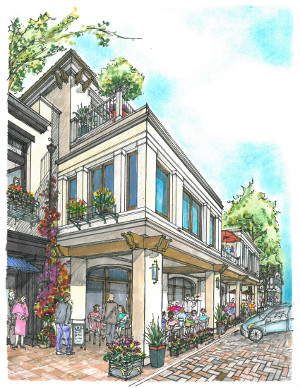 The plan to build 1,700 homes and 90,000 square feet of retail and office space on agricultural land in Valley Center has brought controversy to the community. Image courtesy of Accretive Investments Inc.

But even with the passage of time since details of the proposal were made public and changes were proposed, passions remain high among both proponents and opponents.

Accretive officials say they have taken many steps to address concerns raised by planning officials and members of the public.

CEO Randy Goodson said during the recent public hearing that the density has been reduced by 33 percent and 80 acres of agriculture will be preserved.

Additional amenities have been added and eminent domain is neither required nor proposed. Goodson also said the project was redesigned to better fit within the proposed community that it would create.

“Community character has always been a fundamental priority for our design effort,” he said.

The project’s proponents have stressed that it will create a multigenerational and environmentally friendly community.

Walkability has been emphasized with the design and more than half of the homes will be zero-net energy, said Jon Rilling, Accretive’s president.

“Our goal from the beginning has been to create a traditional small-town feel with the latest and greatest green technology,” he said.

County planning staff has recommended that the project be approved with modifications.

One alteration calls for the proposed town center to be developed prior to, or at the same time, as the third phase of the project. But county planners believe the project addresses the major issues that have been raised, including its compatibility with the general plan.

“County staff has reviewed the Lilac Hills Ranch project and has determined that, on balance, it is consistent with the principles, goals, and policies of the County’s general plan, including the Valley Center Community Plan and Bonsall Community Plan,” according to the planning staff's report.

However, there remains strong opposition to the project.

Both the Valley Center and Bonsall community planning groups have recommended denial of the proposal, with both raising concerns about its general plan consistency.

The Valley Center Design Review Board also voted to make clear their position that Lilac Hills Ranch does not meet Valley Center’s most basic design objectives.

Opponents including Steve Hutchison of the Valley Center Community Planning Group have called the project “leapfrog development,” which is when housing and other development pop up in locations away from established village areas and necessary infrastructure, such as water and sewer service.

He said the general plan is designed to prevent such development, and Lilac Hills Ranch also contradicts the spirit, purpose and intent of the general plan to encourage so-called smart growth.

“It will irreversibly alter the community’s character, destroying rural land in favor of urban sprawl,” Hutchison said at a Planning Commission hearing.

The project has also drawn the attention of at least four law firms that have argued that it does not comply with the county’s general plan.

Before the first public hearing got underway, the Planning Commission held a closed session with counsel to discuss anticipated litigation.

“San Diego County recently spent many years and millions of dollars updating its General Plan and community plans,” the firm wrote in an Aug. 5 letter to the Planning Commission. “All of this planning, money, and hard work should not be lightly tossed aside to further the interests of one developer.”

The letter also was signed by Tim Frank, director of the Center for Sustainable Neighborhoods.

Another group that will be watching the county’s deliberations on the project closely will be the Building Industry Association of San Diego.

Matt Adams, the BIA’s vice president, said that while his organization does not take positions on specific projects, he’s hopeful Lilac Hills Ranch will be evaluated in context of the county’s housing crisis.

He said the county has done little to address the shortage of residential units, pointing to statistics that show that even though it takes up half of the land locally, the county only averages about 6 percent of permit activity in the region.

“The county has anemic housing production,” Adams said. “That has to be taken into consideration while they weigh this decision.”

The Planning Commission is scheduled to continue its public hearing on Lilac Hills at its Sept. 11 meeting.

The panel can make a recommendation on the project, but the Board of Supervisors with have the final say. Their decision is expected sometime this fall.