As El Cajon gets set for the historic groundbreaking of a four-star Courtyard by Marriott this fall, a proposal to bring another hotel of that caliber to the city recently received the initial backing of local officials.

The projects, when complete, will be the city’s first four-star establishments and the only such facilities in East County not on Native American-owned land.

They will also be El Cajon’s first hotels of any kind, as the rest of its larger lodging properties are officially motels.

“I think these are events that certainly put El Cajon on the map,” said City Councilman Gary Kendrick. 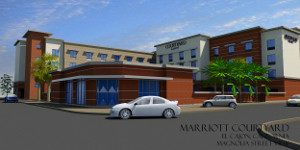 A rendering shows how the new Courtyard by Marriot will look from Magnolia Street in downtown El Cajon. It will be the city’s first four-star accommodation. Image courtesy city of El Cajon

The newer proposal is for an 80-room Hampton Inn to be built at the site of the former El Cajon Police Department at 100 Fletcher Parkway.

A City Council subcommittee selected the Excel Hotel Group and Brixton Capital project after receiving seven initial proposals for the site that were later winnowed to three.

The city is working with the development team to craft an exclusive negotiation agreement that it will bring back to the City Council for approval to keep the project moving forward.

The proposed Hampton Inn, part of Hilton Hotels & Resorts, would feature a restaurant or restaurants, as well as some retail elements.

Kendrick, who sat on the subcommittee, said the panel wanted to move forward with a hotel for the site instead of uses it already has plenty of, such as fast-food restaurants and pharmacies.

“We wanted something special to make El Cajon unique in the East County,” he said.

He envisions the hotel serving primarily families, and believes the planned Marriott will be more oriented to business travelers.

Excel Hotel Group is also the developer of the planned 120-room Marriott in downtown El Cajon at North Magnolia and Rea avenues. It is scheduled to break ground in the coming weeks and open sometime next year.

The Marriott’s amenities will include a swimming pool, exercise room, as well as commercial leasing options.

Tony Shute, El Cajon’s planning manager, said the two hotels should be a boon to the city’s businesses, especially those by Gillespie Field.

The city has heard especially from its advanced manufacturing companies that they have a lot of partners who visit and who would prefer a high-quality place to stay in the area rather than renting a room at a Mission Valley hotel.

“It will be nice for them to be able to stay close to where they are conducting business,” Shute said.

He and Kendrick credited the city’s improved business climate for attracting hotel development in a community that has long sought to have a four-star property.

Shute said a streamlined development process has helped because for developers, time is money.

“I think they find it easy to do business here in El Cajon,” he said.

Kendrick said the reputation has been earned as result of efforts in recent years by a pro-business City Council and city manager to create that type of climate.

El Cajon also benefits from not charging a development impact fee, as the infrastructure needed to make projects a reality is in place.

For example, Kendrick said the absence of the fee will save the Hampton Inn project hundreds of thousands of dollars.

“Our philosophy is how can we help you open your business, rather than what things can we throw in your way to make your life more difficult,” he said.

It all adds up to developers and investors, including those in the hotel industry, wanting to do business in El Cajon.

“El Cajon is going through this renaissance and we are again becoming the hub of the East County,” Kendrick said.