Unemployment of just 3.8 percent as of May 2004, and recently monthly job gains are putting San Diego on track to reach projected annual average growth of 25,200. San Diego County's population continues to grow, surpassing 3 million people in 2003 to become the nation's 17th most populated metropolitan area, said a Burnham report.

"These strong dynamics contributed to more than 1.8 million square feet of retail space that was absorbed during the first half of 2004, almost half of which (809,246 square feet) occurred during the second quarter," said Bethea. "The completion of several new shopping centers and freestanding stores drove most of this activity."

"As a result, countywide vacancy increased slightly from 1.7 percent to 2.2 percent -- although this still is the county's lowest retail vacancy rate in more than a decade," reports Bethea. "Much of this negative absorption is due to the recycling of a few junior anchor spaces and are expected to quickly absorb."

Retail vacancy is highest in the unanchored strip centers at 3.7 percent, followed by community centers at 2.2 percent, and neighborhood centers at an even lower 1.8 percent.

The region's expanding economy continues to drive new retail construction and this, in turn, is promoting healthy net absorption throughout the county.

Leading the region's activity is the North County/Hwy 78 Corridor communities of Carlsbad, Oceanside and San Marcos -- which combined had 918,150 square feet of positive net absorption.

Central (Downtown) and North City both recorded negative absorption, albeit small -- at minus 8,201 square feet and minus 9,369 square feet, respectively.

"These two markets account for just 8 percent of the county's entire shopping center inventory, so impact on countywide vacancy was minimal," said Bill Shrader, a Burnham vice president. "Moreover, the downtown San Diego retail market is very strong and healthy, supported by a fast-growing residential base and new office development. However, because urban retail is not captured in the traditional shopping center survey, its positive performance is not reflected in net absorption numbers."

Major retailers have been particularly active.

On the investment side, San Diego remains a very attractive market.

Buyers acquired 17 shopping centers valued at $5 million or more so far this year for an investment total of more than $230 million.

"The going cap rate for Class A retail properties in San Diego is averaging below 7 percent, and the median selling price is now $196 per square foot," Bethea said.

"The highest priced shopping center was the 90,000-square-foot Torrey Highlands Village Center which sold for $37 million in the first half of 2004.

Other first-half sales of properties over 100,000 square feet included:

"Overall, this doesn't look so good," said Ken Perkins, president and research analyst at RetailMetrics LLC, a Boston-based independent research company, in an Associated Press report. "There are a number of different factors that are coming together to dampen consumer spending."

Retailers found low-to-middle-income shoppers were more frugal in response to higher gas prices and grocery bills. Americans are also worried about their jobs.

On Tuesday, the Conference Board reported a larger-than-expected decline in consumer confidence, and attributed the slide to concerns about job prospects. 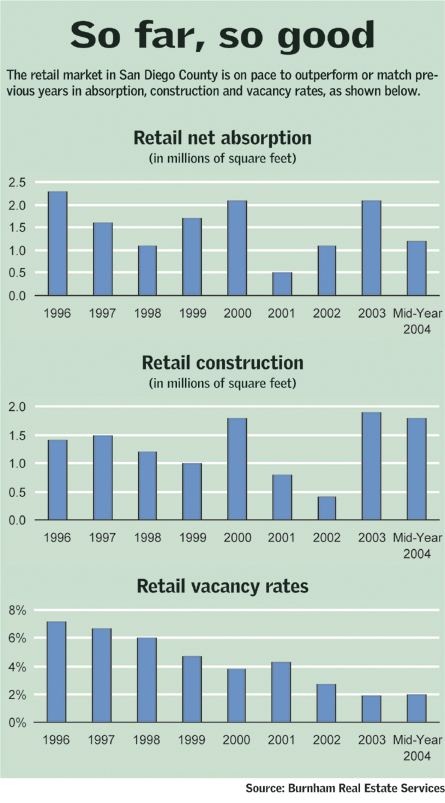