Grading is expected to begin early next year on the planned 152-acre Pacific Coast Business Park, which is the second phase of Rancho del Oro development in Oceanside.

At one point, the land was being considered for residential development, but has been used for farming.

The project is a development of Guthrie Development of Orange, Calif.; Patrick Kruer and Rod Stone of Monarch Development; and DWO Enterprises of Solana Beach with Don Oliphant as principal. Kruer's brother Jonathan Kruer owns a grading company, J.P. Kruer Associates, that will handle the grading for the project. Irvine-based Ware Malcomb Architects is the architect.

Guthrie reports that Kruer and Stone are buying the land from Paul Queyrel on behalf of the team. The property is being marketed by Larry Strickland, Shane Strickland and Rusty Williams of Lee & Associates of Carlsbad.

The property in the vicinity of College Avenue and Old Grove Road is expected to be in escrow for the next two months, according to Guthrie Development President Rob Guthrie. 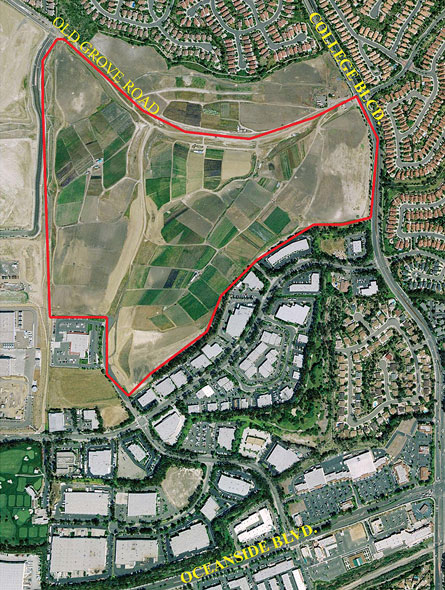 While it is impossible to know how much of the development will be build-to-suit versus speculative construction, build-to-suits have been favored by master developers because they don't have to worry about leasing up a building.

"We laid out as much as 800,000 square feet of spec (industrial) space, but it might be less, and it would be built in phases over the course of years," Guthrie said.

"We're expecting to have quite a bit of multitenant incubator space. It's kind of like industrial apartments," Guthrie said.

He added that the development will have an as-yet undetermined number of "flex" buildings that could be used for office and/or light industrial.

Guthrie said the city of Oceanside's Economic Development Department has been an enormous help getting the project to this point. "They really want to protect their manufacturing base. They want to protect jobs. They are really pro-businesses. They are willing to work with you," he said.

Guthrie added that Oceanside was also one of the few places in the northern half of the county where a significant parcel of land was still available.

The success of nearby Ocean Ranch business park helped validate the 152 acres for industrial development, Guthrie said. He said the property is also closer to decision makers who might be living in places like Rancho Santa Fe and La Costa and would rather not make the southbound commute.

Another benefit is that, while it might not stay that way for long, finished industrial land prices in Oceanside are significantly cheaper than they are in neighboring cities. For example, land that is selling for about $18 in the Carlsbad business parks is $10 to $12 in Oceanside.

Industrial development in the county's most northern city has been booming for quite a while.

The nearby 400-acre Ocean Ranch business center was started in the late 1990s and is nearly sold out, Dougall Agan, principal of Stirling Enterprises, the project's master developer, reported in August. Currently there are more than 1 million square feet of build-to-suit and 790,000 square feet of "spec" industrial space under construction or in the pipeline for completion in the next 12 to 18 months. Biogen Idec (Nasdaq: BIIB) is Ocean Ranch's largest tenant to date. The pharmaceutical company purchased 90 acres for approximately $28 million and upon final buildout will have 1.3 million square feet of office, manufacturing and support buildings.

The first phase of Rancho Del Oro was also about 150 acres and is nearly built out.

The principals of Guthrie have developed more than 400 industrial buildings from San Diego to Ventura County. The division's current development volume exceeds $100 million. "This will be our first venture (as a company) in San Diego County," Guthrie said.