Berg has put a charge in contractor representation

What began as a stint in volunteer community service is leading Andy Berg to serve as the other major spokesman for the San Diego construction industry.

Berg, director of local government relations and economic development for the San Diego National Electrical Contractors Association (NECA), has taken a lead role in thrusting his organization into a more vocal role in the political atmosphere.

"We want to become a major voice of the construction industry," Berg said. "We want them to know that they can get a strong public vote for the public good."

Berg began his career in politics with a couple of terms on the Rancho Penasquitos Town Council.

After being referred to NECA by one of his new political contacts, Berg spent about a month scouring over documents, issues and policies of local business organizations including the Chamber of Commerce and the Taxpayers' Association.

Berg was forced to learn a lot about the construction industry that he now represented without any experience. 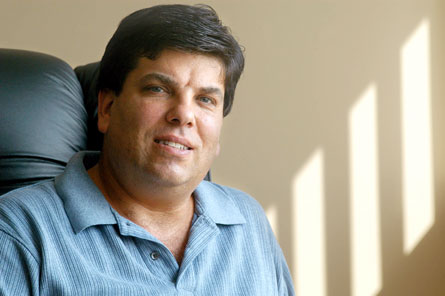 When he took the role in 2002, the agency focused its representation mostly in dispute matters between subcontractors and public agencies like the San Diego Unified School District.

As Berg started lining up successes with municipalities, he began to see other opportunities for representation of the subcontracting industry.

"Andy's done more work for subs in the past year than all of the different organizations have done in a long time," said Pete Spencer, immediate past-president of the San Diego American Subcontractors Association. "He's really been a breath of fresh air."

Traditionally in San Diego, the construction industry has been represented by one contracting organization. The sheer size of the group, however, leads to more specific interests being sometimes missed, Berg said.

For example, in most construction jobs the subcontractor is the last person to get paid. The money starts with the project owner and is given to the general contractor, which then pays the subs.

In some instances, the payment to the sub will be held up for problems on payroll sheets or discrepancies with change orders, and the subcontractor may not know which entity to go after.

Berg was recently successful in getting the San Diego Unified School District to agree to set up a monthly meeting specifically with subcontractors, Berg said.

"It's important that we have representatives specifically for the subs in there because we are sometimes overlooked," he said. "Our interests are sometimes different."

Berg is now trying to get all public agencies to post all payments to subs on their Web site, also in the interest of subcontractors.

"It just makes sense," he said. "This way, when there are people not getting paid on time, they know who they can ask for the money."

Berg has also worked to flex more construction industry muscle in politics. He was an outspoken supporter of the strong-mayor form of government, which appeared on the Nov. 2 ballot as Proposition F.

He was also a member of the steering committee for Proposition A, which extends a half-cent sales tax to be collected and used for countywide transportation projects over the next 40 years.

Berg has also taken a vocal role on the living wage issue at the city of San Diego.

The measure would require contractors to pay their employees a minimum of $10 per hour and an additional $2 per hour for insurance coverage. The rules apply for jobs worth more than $25,000 in city funds or contracts for jobs taking longer than 30 days.