Tower cranes not an endangered species in downtown San Diego

There's a joke that's now fairly well known in the San Diego developer community about the new bird of San Diego, the crane.

It's no secret anymore that construction of mid- to high-rise buildings is now all the rage.

As buildings continue to pop up throughout the area and space becomes tighter and tighter, builders will be looking for high-rise construction tools that have the ability to adapt and maneuver in small spaces.

Two Boston jobsites were the first to bear witness of the enhanced capabilities of the newly introduced 540 HC-L luffing tower crane from Liebherr.

Built using the most advanced in electrical drive systems, the crane is designed to maximize reach, load capacity and versatility. 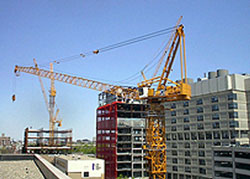 One of the many tower cranes dotting San Diego's skyline.

The crane comes equipped with a luffing boom, which may be the greatest advantage of the tool, said Tony Phillips, service manager for Morrow Equipment.

"The advantage of a luffing boom is that it can get you into tight spaces," he said. "This is run on electricity so you can move it up and down if you've got tight spaces or air rights issues."

The crane can also be erected to enormous heights, up to 194 feet when free standing and attached with a hook. It can also be attached to the building to allow for even higher reach, Phillips said.

"If you attach it to a building you can climb that thing 800 feet in the air," he said.

At the same time, the boom of the crane can be extended to help reach out and retract, depending on the surrounding impediments.

The boom can be extended to 213 feet and also be retracted to 96 feet.

Meanwhile, the crane can continue to lift massive loads.

Phillips admits none of the tools are currently being used in Southern California, although a number of developers looked at bringing one in for an Orange County hospital project.

The reason: Metropolitan areas in Southern California are not dense or tall enough to necessitate a crane of this size and power.

One America Plaza is build to 500 feet, the tallest the city allows. Symphony Towers is built to 499 feet, according to Emporis, a commercial real estate firm.

By comparison, in San Francisco, the Transamerica Pyramid was built to 853 feet, according to Emporis.

"There is not too big of a calling for it right now because there are not enough confined spaces," Phillips said.

However, as downtown continues to develop in the Centre City area and spreads to the East Village, cranes of this magnitude may soon stand tall in the San Diego skyline.