There are bridges that do more than just provide a way across. They can help define a city, and San Diego is looking for just that for its bay front near the convention center.

A new pedestrian bridge is being planned that will extend from the port's new 2,000-space parking garage over Harbor Drive, the San Diego Trolley tracks, and the Burlington Northern railroad tracks as an integral part of the Park to Bay development (see map below).

"We believe this is a work of art without the welcome to San Diego banner," said Garry Papers of Centre City Development Corp.

After many months of discussions and hearings among CCDC, the mayor's office, the Gaslamp Quarter Association, the East Village Association and others, four proposals from one San Diego architect, Safdie Rabines Architects, were agreed upon.

The bridge, regardless of which proposal is chosen, will consist of two 175-foot spans supported by smaller segments at each end. The bridge is expected to be 450 to 500 feet long, and 16 feet wide upon completion. The three-story structure will be fully compliant with the American with Disabilities Act.

A favored option (the proposals range from about $8 million to $10 million) would be a self-anchored suspension bridge largely made of pre-stressed concrete with one single suspension pylon.

This option features a bridge that at least from one angle appears to lean heavily to one side; CCDC spokeswoman Donna Alm said she likes the innovative design. It's also the architect's favorite. (Second from top)

"I'm leaning toward the suspension bridge. It has a sort of shape I find very pleasing. It's not too expensive (about $9 million) and the city deserves a landmark structure," Rabines said.

He emphasized that he will digest the community input before making a final decision, however.

Another bridge known as the Arched Street Shell would have had steel sails that would have echoed those of the San Diego Convention Center. (Third from top)

One option would construct a truss bridge out of tubular steel columns. Joe Tognoli of the TY Lin International engineering firm said steel can be a problem because of corrosion over time, but that galvanizing the steel is one possible remedy. He said anodized aluminum could solve this problem. (Top)

"This bridge could take quite a while to build because of the steel (versus concrete) construction," Tognoli said.

The general consensus on this plan was that it looked too massive, however.

Finally, there could be the single-pylon cable stay bridge. That may not have been as favored as the self-anchored suspension bridge, but it still garnered a lot of attention. (Bottom)

While no formal decisions had been made, the self-anchored suspension bridge would appear to be the candidate to beat, but given that all the designs come from the same architect, he has nothing to lose.

After taking the recommendations into account, Rabines and TY Lin will present their recommendations for the bridge from 3 to 6 p.m. on Oct. 28 at the Culy Warehouse at 335 Sixth Ave.

The bridge is considered an integral part of a grand scheme designed to link Balboa Park with the harbor.

"It's important that this be a dramatic, elegant and memorable gateway to downtown and East Village," said Mark Ashley of Ty Lin.

Rabines said it will thus be important for the bridge to allow for view corridors whenever possible.

"And we will use the bridge to enhance the parking structure," Rabines said.

But first the bridge has to get its funding. Ashley said while the design has been paid for, the monies for construction have yet to be allocated. Given that the bridge is a prerequisite for the extension of Park Boulevard, the funding search has gone into overdrive. Ashley said the best hope is to get the funds out of a federal transportation bill now stuck in Congress, and concedes that it will likely be next year before it moves forward.

The hope is that whatever plan is chosen, that the bridge could be completed 18 months from today. It is an ambitious timetable made harder by the fact the plan must pass the muster of some 17 local, state and federal entities before construction can even start. 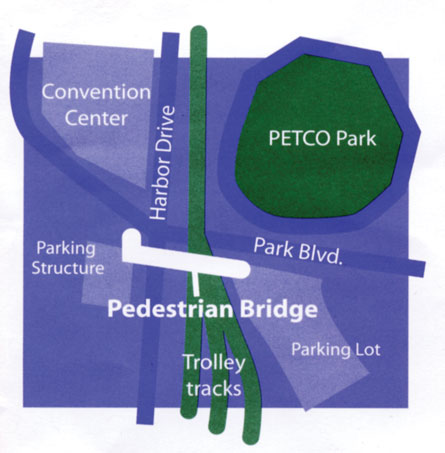