Ottilie works to stave off challenges to mayor's legitimacy

If you don't know Bob Ottilie, you haven't been reading the newspaper. As the sole courtroom defender of San Diego Mayor Dick Murphy, the longtime local attorney who specializes in election law is fending off challenges to the mayor's recent election.

Ottilie will be in court Monday arguing that 5,547 San Diego voters who wrote the name Donna Frye did nothing but get their candidate on the ballot. A vote isn't cast until the corresponding bubble is filled, according to state law and Ottilie, who takes exception to suggestions that the county Registrar of Voters is failing to "count every vote."

"They're not votes," said Ottilie. He sees himself as an indirect advocate for the county Registrar of Voters Sally McPherson, who refused to count the unbubbled ballots as demanded by Frye supporters. 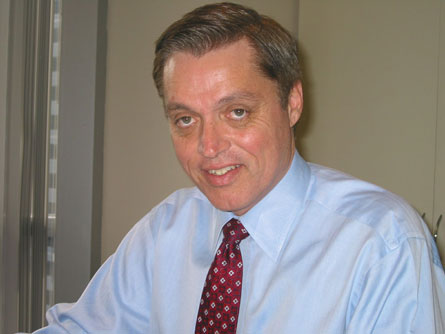 McPherson had no more right to count the unbubbled ballots than San Francisco Mayor Gavin Newsom had a right to marry same-sex couples in violation of state law, according to Ottilie. He said the California Supreme Court's May 2004 decision in Lockyer v. City of San Francisco bears on this week's trial because the high court ruled that Newsom exceeded his authority by deciding for himself that the state law against gay marriage violated the state constitution's equal protection clause.

Ottilie faces some formidable opponents. Fred Woocher, the Santa Monica attorney who filed a lawsuit on behalf of two residents, is noted across the state for his expertise in elections law. "He's got more expertise and experience than anyone in California in litigating election results," said Leo Sullivan, a San Diego attorney who specializes in political law, and knows Woocher only by his reputation.

Bruce Henderson, a notable public interest attorney, has beaten Ottilie before. Henderson and Ottilie ran against each other in a City Council District 6 race in 1987 that resulted in a Henderson win.

But Ottilie has a solid reputation of his own as a hard-nosed, persevering attorney who puts his clients' needs above even his own personal reputation. Not that his reputation isn't stellar. Last week's pre-trial hearing in the Murphy election lawsuits is a perfect example, according to Sullivan, a partner in the law firm Sullivan Wertz McDade & Wallace. Most lawyers would have deferred, as a professional courtesy, to opposing counsel requests for a continuance to round up witnesses, but Ottilie sensed doing so would not be in the best interest of his client.

Sullivan has seen Ottilie's trial skills firsthand, most recently in a lawsuit challenging the eligibility of George Stevens to run for the council District 4 seat left vacant by the death of Charles Lewis. Sullivan represented City Clerk Chuck Abdelnour, who placed Stevens on the ballot despite a city attorney opinion indicating that Stevens was ineligible. Ottilie represented Stevens and won, placing the former councilman on the Jan. 4 special election ballot.

"I have always said there are two lawyers in town that I would turn to if I got in trouble," Sullivan said. "One of them is Ottilie, the other is (City Attorney) Mike Aguirre."

Ottilie's professional development began in Oelwein, Iowa, where his first jobs involved detasseling corn -- a pollination must -- and spending summers as a carpenter for Chicago Northwestern Railroad. The conservative Republican raised in a passionately political state admits to being a "union guy" during his railroad years. His father was a small-town family doctor, who helped everyone who came in the door, regardless of whether they could pay.

It is that professionalism that guides Ottilie's practice in a sleek high-rise building in downtown San Diego, where he bemoans his own profession's focus on money.

"I think we've turned law into a business," he said. "A lot of people go into it for the money."

He'd like to see pro bono work become a licensing requirement much like the continuing education courses attorneys are required to complete periodically to stay in practice. "One of the things I've tried to do is try to help everybody that walks in the door or calls on the phone, even if they can't afford to pay," Ottilie said. "A lot of people do that, but I don't think there's enough of it."

Although Ottilie has a thriving practice and is married to another successful attorney, Sharon Spivak, he clearly thinks of law as a profession in perhaps the truest sense of the word -- as someone whose extensive training can be used toward considerable good. The approach seems to come from the joy of a man who works for himself, schedules work around the life events of his 7-year-old daughter Madeline, and has time for pet projects like raising $3.5 million to renovate his Stanford University fraternity house and mentoring younger brothers.

He specializes in elections law, but only during elections. The rest of the time his offices are spent on a variety of civil litigation. He left San Diego law firm Post Kirby Noonan & Sweat in 1985 to found his own firm and jumpstarted his elections law practice in 1997 while representing Tom Behr in a recall election to replace then-District 5 Councilwoman Linda Bernhardt. In 1992, mayoral candidate Susan Golding hired Ottilie to represent her in legal challenges to the campaign financing of her opponent Peter Navarro.

Age has made him less partisan than he felt as an overdressed Republican attending a 1987 Democratic fund-raiser filled with liberals in shorts. Now, Ottilie spreads his influence and campaign contributions among Democrats and Republicans and has no plans to run for office again. The council race, though unsuccessful, was the fulfillment of a dream for Ottilie, who had been engaged in politics since a young age.

"The dream isn't always to succeed," Ottilie said. Among the lessons the race taught him was that there are hundreds if not thousands of people in the community whose contributions through youth leagues, church groups and volunteer programs keep their neighborhoods functioning and make the city work.

"Oftentimes you can have more of an impact in your community by not running for office," Ottilie said.