Bob Kelly's downtown office is large but not opulent, governed by an oval table where visitors can chat comfortably -- which is apropos. As Kelly will tell you, it's his job to bring people together.

And part them willingly -- even eagerly -- from their money. 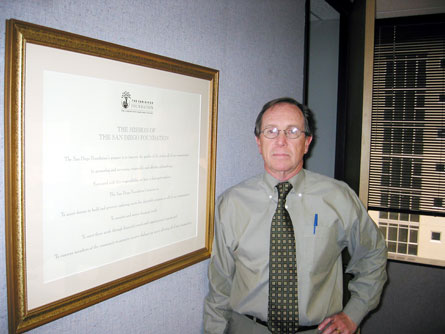 As president and CEO of the San Diego Foundation, the Point Loma resident leads an organization that for 30 years has quietly set about helping county residents help others. The foundation's $480 million endowment is proof enough of its success channeling money into worthy causes.

When Kelly took the helm 10 years ago, the foundation's $100 million endowment dispensed of $4.5 million annually. This year, as one of the top 20 foundations in the nation, Kelly and the group's 40 employees helped channel $47 million to a wide variety of causes on behalf of thousands of local donors, many of them anonymous.

"Bob Kelly will do whatever it takes to advance the cause of philanthropy in this region. He's totally committed to it," said Foundation Board Member John Raymond. "He's dealing with donors, large and small, out in the field all the time. He does it with a soft touch and a sense of humor -- but he's also dogged."

Evidence of that soft touch can be found in Kelly's affable smile and an easy manner. The 55-year-old is the sort you could easily find in a boardroom or on a surfboard -- spending time with sons Kris, 24, and Ryan, 21. (Both, Kelly says, are out of town pursuing acting and surfing opportunities, respectively.)

In his Kettner Boulevard office, Kelly smiles as he reaches for a binder filled with photos and thank you letters from local students -- kids in college thanks to foundation scholarships. In the last year, 100 scholarship funds administered by the foundation have awarded more than $600,000 to 250 students throughout the county, according to its 2004 annual report.

Kelly says he likes it that he can go anywhere in San Diego and see the foundation's impact on the community: Lights and poinsettias in Balboa Park, flags at local libraries, playground equipment along Mission Bay, a land preserve on Vulcan Mountain, baseball equipment for Hoover High School, construction sites funded by more than $4.2 million in wildfire relief.

"Almost everyone cares about people," he says, "so motivating them is not that difficult. They want to help but they want to do it in an easy, simple way. And that's what we do."

Kelly seems like a man comfortable in his own skin. Personal questions are not avoided but are just as likely answered with a reference to a colleague, or the foundation and its latest efforts. He's arguably among the most influential people in town but he's never been profiled in the media. That little has been written about him is not an issue.

In fact, he says, it's preferable.

Kelly got his start in nonprofits as a community organizer for the American Cancer Society, doing everything from bike-a-thon fund-raisers to public education programs to coordinating rides for chemotherapy patients.

At that time, America had a lot to learn about cancer, Kelly says, even though many had felt its presence -- through their own illness or that of family or friends.

In Southeast San Diego, he helped the Cancer Society educate women about the importance of pap smears -- the most successful test in the fight against cancer, according to the society. The group ran skin cancer screening booths on local beaches, with the aid of doctors who would later become some of the most prominent dermatologists in San Diego.

At age 29, Kelly became the youngest chapter director in the United States and, with the support of prominent locals such as Mike Madigan and Herb Klein, among others, the San Diego chapter flourished.

"We became the number one cancer society in the U.S.," Kelly says. "We raised more money and had more programs running than anybody."

That success led to other opportunities. He served as senior vice president and later as CEO of the Sharp Health Care Foundation. When changes at Sharp seemed likely -- thanks to a possible merger with Columbia/HCA -- Kelly accepted the corner office at the San Diego Foundation.

It was a time when local philanthropy was taking an interesting turn as the region's economy became more diverse. With the advent of tech companies, such as Qualcomm Inc. (Nasdaq: QCOM) and biotechnology companies, a spring of new wealth altered the landscape, he said.

San Diego never had the legacy of industrials like Carnegie, Ford and Rockefeller. Suddenly there were people like Irwin Jacobs, John Moores and Sol Price, and a host of millionaires working at new startups and booming techs and biotechs.

Yes and no, associates say.

Kelly deserves a lot of credit for building a strong board of directors and working hard to motivate the foundation's 300 volunteers, according to Mel Katz, a longtime friend and co-owner of Manpower Personnel Services Inc.

"Bob has no problem with taking a back seat or having a strong board member out front," say Katz. "It's that quiet style of his and the whole line about the guy who doesn't care about who gets the credit. He's the guy who gets things done."

"He knows he's building something that will live on long after he's moved on. And it's something he can be proud of."