Veteran headhunter not slowing down

After 35 years in the business, Frank Radosevic is considered the most senior executive search consultant in the United States.

As president and founder of the local headhunting firm Radosevic Associates, Radosevic has placed countless executives with companies specializing in consumer electronics, telecommunications, biotechnology and various other industries.

Last September, at the annual Executive Search Summit in New York, Radosevic was named the most senior retainer executive search consultant in the United States.

Sitting in his home office in Carmel Valley, the 72-year-old native of Croatia said he has no plans to retire any time soon. 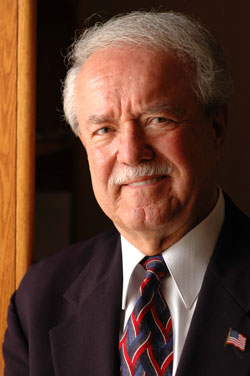 "I believe in what I'm doing," Radosevic said. "There is no more important job."

Radosevic wasn't always a headhunter. He spent his early years studying engineering and living in various countries as a political exile during turbulent times in Europe. Consequently, he received engineering degrees from three different universities in Croatia, Austria and Germany.

"I was single, educated and healthy," Radosevic said. "I was the perfect European slave."

Slave or not, Radosevic soon found engineering work. He designed vacuum furnaces for Hevi-Duty Heat Treating Co. and later moved on to become vice president of engineering and operations for Hughes Aircraft Co. in the late 1960s.

While working for Hughes, Radosevic was often asked his opinion of engineers who applied for work there. This led to Radosevic's career as a headhunter.

Back then, there wasn't really a headhunting field. "Even today, the U.S. Labor Department does not have a classification number for it," Radosevic said.

In 1970, he went to work for San Diego-based VIP Employment Agency as director of the "high-tech" department. Back then terms such as "retainer," "compensation package" and "severance pay" were either rare or unheard of.

Radosevic developed his own, patented methods for headhunting. One such method involved having his corporate clients write out an extensive "search position profile" for a job opening to spell out a company profile, employment conditions, ideal candidates and other key aspects of the job.

A typical profile could be eight pages long for a vice president and nearly 30 pages long for a president. On the flip side, he also came up with a profile for job candidates that included everything from extensive references to what mistakes the person has learned from on the job.

Radosevic recalled one experience where he asked his client why they chose to hire someone who had completed one of Radosevic's profiles. The head of the company told him, "Because I made the same mistakes," Radosevic said.

Radosevic started his own firm in 1979. In the beginning, he worked with companies involved in high technology and nuclear and military electronics because those were the driving industries in San Diego.

Since then, not only have more industries arrived, old industries have branched out, he said. For example, what used to be called the "medical industry," is now divided into bioinformatics, diagnostics, drug discovery instrumentation and software, biomedical and so on.

This poses challenges for headhunters, who have to stay on top of all those industries to do the job, Radosevic said.

"Our job is to understand and differentiate," Radosevic said. "A competent headhunter is not particularly an expert in any one of those fields; his or her expertise is understanding the industry."

"San Diego, a city of 3 million people, is considered one of the most expensive areas regarding the cost of affordable housing," Radosevic said. "It is essential to consider that aspect of relocation when recruiting people from other areas."

According to Radosevic, people should look for the same things in a headhunter as they do a financial planner: knowledge, experience, familiarity, trust and confidentiality. While he finds it difficult to define his job, he applies the old saying, "if you're in the business long enough, then you know the ropes."

"The end of the rope is not when the candidate is hired," Radosevic said. "It's when the guarantee is up and beyond, in order to create the repeatable business."

In his office, Radosevic keeps the first three dollars he made as a consultant in a frame on one wall. He also has a statue of Santa Claus on his desk to remind him "to always give something," and a picture on one wall bearing his firm's motto, "the quality remains long after the price is forgotten."