No rest for the artistic

Des McAnuff is tired. But you'd never know it if the energetic artistic director for La Jolla Playhouse didn't admit it himself. 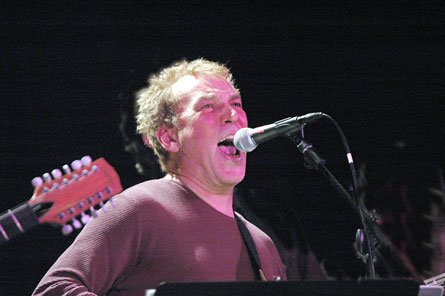 La Jolla Playhouse Artistic Director Des McAnuff strapped on a guitar and hit the stage with his Red Dirt Band to entertain guests at the Playhouse's open house, Jan. 15. The event celebrated the opening of the Joan and Irwin Jacobs Center for La Jolla Playhouse.

It's the sort of exhaustion that comes from a lot of passionate, determined work. Lately, McAnuff has been in rehearsals nine hours a day, six days a week, while also handling the usual administrative work, fund-raising and planning upcoming productions.

"It's been a little bit relentless," said McAnuff, who recently took a few moments between a bite to eat and zipping off to a meeting to discuss the goings-on at the Playhouse.

One measure of the Playhouse's success is national recognition. "Specifically in terms of its national profile, I think the Playhouse has ascended to a new level," said McAnuff. "It's been a very fertile period, and a lot of the projects that we've developed here have gone on to greater heights," including the musicals "Thoroughly Modern Mille" and "Dracula."

Last year's Tony Award winner for Best Play, "I Am My Own Wife," emerged from the Playhouse's Page to Stage play development program. Billy Crystal's "700 Sundays," directed by McAnuff in the Page to Stage program in April, is now one of the hottest tickets on the Great White Way. McAnuff also recently wrapped up "Jersey Boys," the theater's most successful production ever by ticket sales. There's Tony talk about the show, and it hasn't even landed on Broadway yet.

With all the activity at the Playhouse, McAnuff has had little time to relish the theater's many successes.

"I'm expecting to enjoy it more when I get a little bit of downtime," said McAnuff. "But it's been really exciting, and I think the new building is proving to fulfill all of our dreams."

The Potiker is what's called a black box theater -- literally, a large, rectangular space with black walls. The theater provides flexibility in staging productions, with removable seating for up to 450, a trapped floor and tension grids overhead to hang sets and lighting in any configuration.

"In a way the Potiker is like having a 100 new theaters because it can transform and change with every new production," said McAnuff. "It allows us to expand our wings even more and take on a wider variety of projects. And hopefully, it allows us to attract more and more adventurous theater artists."

The new theater complex has, in a sense, been 20 years in the making. When McAnuff took the helm of the Playhouse in 1983, the search committee asked him to describe his dream theater, and then promised to help him create it.

It was part of the reason McAnuff, then in his early 30s, decided to make the move from New York to head the re-emerging Playhouse. "When someone says they want to help you fulfill your dreams, that's a pretty tempting offer," he said.

In 1994 McAnuff left the Playhouse for the glitter of Hollywood, returning to the Playhouse for its 2001 season after then-artistic director Anne Hamburger abruptly left. Now, with the completion of the Jacobs Center and the Potiker Theatre, McAnuff said the Playhouse is very close to what he imagined all those years ago.

"This in many ways goes beyond what I initially expected the Playhouse to be. We dreamt of a three-theater complex in the middle of the '80s but the Jacobs Center goes beyond those dreams, no question about it."

At a cost of $16.5 million, securing the funding to build the Jacobs Center is surely another measure of the Playhouse's success. The organization engaged in a seven-year capital campaign that raised $44 million and, in addition to covering the construction costs of the Jacobs Center, established an endowment and provides annual support for artistic and educational programs.

The center is named for longtime Playhouse supporters Joan and Irwin Jacobs, who donated more than $5 million toward the new theater complex.

Joan Jacobs, a major philanthropist of the arts who also resides on the Playhouse board of trustees, said McAnuff is a big part of the reason she and husband Irwin -- founder and CEO of San Diego-based Qualcomm Inc. (Nasdaq: QCOM) -- have given their time, energy and money to the Playhouse.

"If you don't have a great artistic leader, what's the sense in doing it?" she said. "We have always supported the organization -- any organization that we've supported -- because of the people involved in it."

The Potiker also allows La Jolla Playhouse to schedule a year-round season. For the first time, the Playhouse curtain went up on a winter performance with the Potiker's inaugural production of Georges Feydeau's "Private Fittings," which opened Sunday and runs through March 27.

"We've never had the luxury of a continuous season where people could count on there always being a play at the Playhouse," said Jacobs. "I think it's important that we now have a permanent place that we can call our own."

But just because the Jacobs Center is complete, don't expect to see McAnuff coasting anytime soon.

"We still have challenges," he said. "The building is really only an opportunity. It's about the work that goes on in the theater that's ultimately important, so that's where my energy and efforts are going to be going -- into actually producing plays."