A sense of justice

Few names these days in politics evoke such emotional response as does the Santa Monica lawyer contesting the results of the Nov. 2 mayor election. 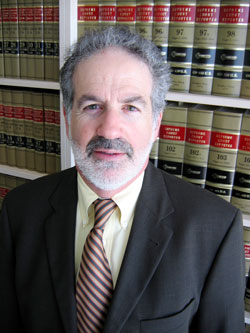 Frederic Woocher, 52, a self proclaimed "public rights" attorney, injected himself into the now fragmented world of San Diego politics after funding a recount of "unbubbled" ballots cast for write-in mayoral candidate and Councilwoman Donna Frye in the Nov. 2 election.

For Woocher, an experienced election lawyer, the case is another chance to preserve what's right.

"It appealed to my sense of justice," Woocher said. "That these people weren't having their votes counted and someone was holding the office that didn't get the plurality."

Woocher said he still has not been paid a dime for his work on the first case, which he lost in San Diego Superior Court in February and has appealed to the state Appellate Court.

"What's in the best interest is that the person that got the most votes be the mayor," Woocher said.

"I don't think it's better in the long run to have people that don't have their votes counted," Woocher said.

What else can be expected from a man who finished a Ph.D. in psychology, then decided to go to law school?

"One of the parts that I found interesting was eye-witness identification and how the legal community worked into the rules," Woocher said. "When we did studies, we knew the human memory was quite fallible. In order to more fully explore that, I got a joint degree in law and psychology."

After a couple of years of internships while completing a law degree, Woocher secured a clerkship with Supreme Court Justice William Brenner.

Following the clerkship, Woocher took a job in the office of U.S. Secretary of Defense Harold Brown, in the administration of then-President Jimmy Carter.

The experience was short-lived, as Woocher got the job one year before Carter lost the election to President Ronald Reagan in 1980.

At the time, Woocher had had enough of Washington and headed back West to join a newly founded nonprofit public interest law firm -- the Center for Law in the Public Interest -- led by a team of reputable legal experts.

"It was a great opportunity because I could start right away handling high-impact cases," Woocher said.

In just two years, Woocher was back in Washington in the same offices that he clerked in, this time trying a case. He represented the League of Women Voters in a suit against the Federal Communications Commission.

In 1988, Woocher left and took a position with then-California Attorney General John Van de Kamp and worked as special counsel on the executive staff.

In 1991, Woocher and Michael Strumwasser, a friend from Van de Kamp's office, made a rag-tag start at a law firm in Santa Monica.

Woocher set his sights on what would be his biggest challenge -- which turned out to be perhaps his biggest, and most unlikely, victory to date.

In January 1991, Insurance Commissioner John Garamendi was newly elected and undertook the reformation of the insurance industry. Upon taking office, Garamendi contracted Woocher and his partner Michael Wasserman to shepherd the legal aspects of Proposition 103.

"We got thrown into the middle of the most vicious war with the insurance companies," Woocher said. "We took over 36 active cases and could barely keep up with signing the substitution of council forms."

Passed in 1988, Proposition 103 mandated that property and casualty insurance rates had to be approved by the insurance commissioner prior to use.

Woocher and Wasserman devised a plan to funnel all the cases into the precedent that would be established in the ruling of the case, 20th Century vs. Garamendi.

Its first run in Superior Courts lost, but a later appeal to the California Supreme Court yielded a more favorable result and Woocher, Wasserman and the staff of the Insurance Commission won.

"It helped establish us in the legal community," Woocher said. "There were articles of the legal journals about these two guys. We earned some respect."

The victory in the case and the proceeding coverage set the stage for the kind of firm that Woocher was looking for: A team of lawyers that could pick and choose between high-impact cases that would make a difference.

"That case allowed us to go after cases that fit our interests and issues that we got into law to do," Woocher said. "Issues involving public policy and interesting legal questions. Almost always on the side of consumers, citizen groups or public interest organizations."

The fact of the matter is that Woocher's got a truckload of street respect -- of five different election lawyers called for comment in San Francisco, Los Angeles, and Orange counties, every one classified him as an "election law expert."

Not one lawyer interviewed, however, would go on record, because it's more than likely that they'll be up against him in a courtroom.