Off to a fast start

Perry has San Diego Trust Bank in an enviable position

Not to overstate his situation, but Larry Willette was pleasantly retired in April 2002 when Mike Perry, enthusiastic entrepreneur, called to gauge his interest in joining a new bank. 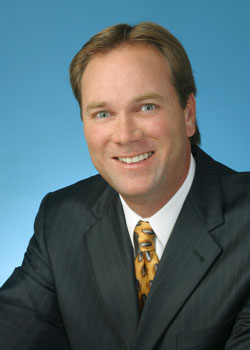 Willette, who was chairman of Point Loma's Peninsula Bank when it sold for $104 million in 1999, enjoyed his time away. He had received similar offers and declined them all.

Assuming this was no different, Willette encouraged the caller, former Scripps Bank executive Mike Perry, to talk with some of Willette's contacts and maybe get back to him.

The bank would become the fastest startup to book a profit of any community bank recently opened in San Diego.

"Mike convinced me over the time that we got to know each other that he really wanted to do this," Willette said. "Combined with Toby, they're both young guys that have plenty of time to build an organization."

"I've been completely impressed with Mike," Willette added. "He's got a great personality, he's very outgoing; he communicates extremely well; and for someone who's 42 years old, he has a good grasp on the big picture of banking."

His charisma and enthusiasm was a magnet for investors and employees.

"If you give this guy an opportunity to prove himself and show what he can do, you can't say no to the result," said Reschan, who like Willette turned down several offers from other startups. "We're all pretty glad we didn't say no."

For Perry, who has a finance degree from San Diego State University and graduated from the Pacific Coast Banking School, the source of his drive to succeed is not unlike the responsibilities he learned as an athlete.

"If you're going to put on a uniform, you should go out there to win each and every day," Perry said. "My job as CEO is to set the tone and tempo for the organization, and I approach every day with a winning attitude."

There are two types of startup, or de novo, community banks in San Diego: those with director or management ties to the banks that sold in the late 1990s, such as Peninsula and Scripps, and those without.

Of the banks with ties, no institution draws from local banking history quite like San Diego Trust. Perry started at Scripps; Willette and Reschan worked for Peninsula; and a few of San Diego Trust board members are from the old San Diego Trust and Savings Bank, which is where the business' name originated. Wells Fargo, which acquired the name through an acquisition, declined to protect the rights several years ago.

San Diego Trust is not the biggest startup community bank in San Diego; it has just $53 million in assets compared to the median asset level of $72 million for local de novos through Dec. 31, the most recent statistics available from the FDIC.

Nor is it the best known; the bank rarely advertises.

However, it is extremely efficient. San Diego Trust has one branch, 14 employees and has made just $34 million in loans. But it took the bank less than 12 months to make its first monthly profit. Previously, local de novos took nearly two years to escape losses.

"Our formula was to try not to bank everyone in town, be very selective and not compete simply on the basis of price," Perry said. "You have to be competitive, but we've managed to keep our expenses under control."

Willette's days as a free-to-roam retiree are over. While he still makes the occasional trek, Willette said he's in San Diego Trust offices at least three days a week.

"You usually have second thoughts about these things, but I don't," Willette said. "It seems to be working out the way we hoped."

Have an opinion? Send a letter to the editor.

Subscribe to The Daily Transcript. On your doorstep from $2.88 a week.