Life in the trauma unit

From research to administration, Hoyt must stay cool under pressure

By JENNIFER McENTEE, Special to The Daily Transcript
Friday, April 8, 2005

In his office on the UCSD Medical Center campus in Hillcrest, housed in a small converted apartment complex on Front Street, David Hoyt speaks with the kind of even-keeled deliberation you'd expect from a seasoned surgeon and longtime administrator. 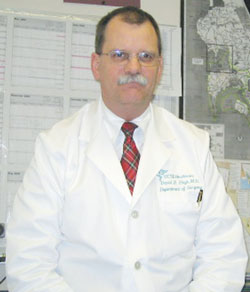 As chief of UCSD's division of trauma, burn and surgical care, Hoyt might even be the kind of doctor you'd choose for yourself.

Truth is, most patients who come under Hoyt's care and that of his colleagues aren't typically in a position to decide much on their own. They've been shot or stabbed, burned or injured in a car accident. Time is short and the risk of death is high.

Which is exactly what drew Hoyt to this profession in the first place.

"Trauma requires you to know a little bit about everything in medicine and surgery. It requires you to think on your feet. You're oftentimes dealing with life threatening decisions, which is exciting."

With a minor injury, say if you scratch your hand, the cut turns red and swells, he said. With major injury, that happens on a systemic level and can ultimately be fatal.

Hoyt's work actually involves a number of research projects, ranging from basic science to clinical trials. Among the newest is a broad collaboration of multiple medical centers that seeks to analyze how care given in an ambulance affects a patient's outcome. The Resuscitation Outcomes Consortium is funded over five years with $50 million by the National Institutes of Health's National Heart, Lung and Blood Institute, the U.S. military and the Canadian government.

"It will be a huge scale project once it's up and running. There's never been anything like it before," said Hoyt.

The funding will enable the study of medical devices used to treat patients with cardiac arrest, and to compare the merits of existing saline treatments against high-concentration saline.

The NIH dollars will also fund the kind of work being done by UCSD and about 20 other trauma centers nationwide with a blood substitute candidate called PolyHeme. Following clinical trials in the late-1990s, Illinois-based Northfield Laboratories (Nasdaq: NFLD) has been granted special regulatory clearance to test PolyHeme in trauma patients at the scene of the injury, in the ambulance and in the hospital.

The blood substitute is unique because it can replace large volumes of blood quickly with less risk of disease transmission and regardless of blood type. It also has a yearlong shelf life.

"We think that it has the potential for reduced mortality," Hoyt said.

It's also somewhat controversial because patients eligible for the study are not likely able to give consent. The U.S. Food and Drug Administration granted PolyHeme researchers an exception to the informed consent requirement.

Nationwide, Northfield Laboratories intends to enroll 720 patients in the trial. Hoyt estimates the blood substitute has been used in about a dozen San Diego patients so far.

UCSD treats about 2,300 trauma and burn patients annually, or about 12 percent to 14 percent of hospital admissions. Hoyt explains that trauma is as multidisciplinary as it gets, with the variety of injuries requiring essentially every kind of physician.

That multidisciplinary approach, and the carefully considered standards to manage that kind of diversity, makes trauma a model for all other health care, said Hoyt.

"I believe the way we conduct trauma care in this country is the future of the way we should conduct medicine. It's a high-performance team, it's multidisciplinary, you measure outcomes. We are absolutely cost-efficient," he said. "I believe that the future of payment should be coupled to that kind of quality of performance. It's the way all high-end care -- whether it's cancer care or vascular care or obstetrics or anything else -- should be practiced."

The practice of trauma care has changed over the 21 years Hoyt has been on UCSD's faculty, mostly in terms of epidemiology. The severity of injuries has lessened, particularly as vehicle safety improves, he said. Medical imaging has improved, too, requiring fewer exploratory operations.

The patient population has shifted to San Diego's seniors as the population ages, according to Hoyt. There are more incidents of seniors falling, or getting hit by cars in crosswalks. Doctors must now take into consideration how older patients tolerate injury, and other conditions they might have, such as diabetes or heart disease.

And then there's the administrative side of Hoyt's job. UCSD has come under fire recently for a plan, entitled "A New Vision for Healthcare," that proposes to move some of the Hillcrest services -- including trauma -- to UCSD's La Jolla campus over a period of several years. Some have accused UCSD of deserting poorer patients in favor of tonier North County clientele.

Hoyt is hesitant to speak too candidly about the proposal, for fear of fanning the flames.

"What we have put out there is a potential vision for consolidation of our two hospitals. Which from a standpoint of economy of scale, efficiency, better care, makes a lot of sense," Hoyt said. "The community perceives that we're walking away from something -- that's the last thing that we want to do. We're looking at it more as a way to make things even better."

"If that's not a viable vision, then we'll have to adjust or modify that vision."