Greg Koch positioned his video camera on a dirt hill as a crane began lifting a giant concrete wall in place at the site of Stone Brewing Co.'s new building off Citracado Parkway.

"That's the door to our restaurant," Koch said, as he peered through his camera to record the historic moment. "And that's going to be the front door over there," he added, pointing to another concrete slab with a large square cutout. 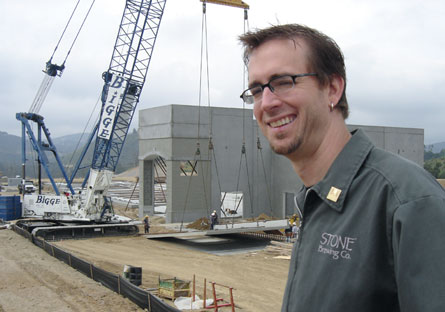 Greg Koch's company has grown on its own terms by focusing on what it considers quality beer. Photo: Michael Buchanan/The Daily Transcript

Despite a nagging cold, the 41-year-old chief executive officer was in good spirits as he described the layout of the new, 58,000-square-foot brewery -- a $12 million project that will yield a brewery capable of making 200,000 barrels of beer a year; a 9,500-square-foot restaurant that will offer free-range buffalo and other eclectic fare; a visitor's center and gift shop and a large patio area overlooking a one-acre landscaped beer garden.

Stone Brewing plans to move its brewing operation from San Marcos -- which made 34,000 barrels of beer last year and is at capacity -- to the new location in October and open the restaurant by the end of the year -- just a few months shy of the North County company's 10th anniversary.

For Koch, the move marks a new era for a company he and his partner Steve Wagner started in a Solana Beach apartment in 1996.

Stone Brewing has since grown into a microbrewery with a nationwide distribution chain and $11 million in sales last year. The company was recently awarded "Brewery of the Year" by Malt Advocate Magazine and has twice made Inc. Magazine's list of the 500 fastest growing companies in the United States.

"I wouldn't say that this is exactly where I thought our brewery would be," Koch said, referring to the 3.5-acre site in the Escondido Research and Technology Center business park. "But it's exactly where I hoped our company would be."

Koch has not grown his company by trying to appeal to the masses. Known for "aggressive" beers like its Arrogant Bastard Ale and marketing slogans like "fizzy yellow beer is for wussies," Stone Brewing has grown on its own terms by focusing on what it considers quality beer and hoping customers will agree.

Arrogant Bastard Ale is a good example. At 7.2 percent alcohol per volume, the dark brown beer was hardly in demand by most people when the company released it several years ago. The back of the bottle proclaims, "This is an aggressive beer. You probably won't like it."

People wound up liking it. Arrogant Bastard accounts for a quarter of the company's annual sales. The beer is most popular in Philadelphia, where more bars have it on tap than any other city.

When asked about the company's market share in San Diego, Koch replied, "I don't know ... and I don't care."

"We make great beer and our job is to do just that," Koch said. "If we want to make what the public thinks they want, we'd do market research."

Koch had an independent streak even before he started Stone Brewing.

He left his hometown of Pataskala, Ohio, in 1984 and moved to Los Angeles to attend the Guitar Institute of Technology because he wanted to be a rock star. But he soon realized his talent as a musician was lacking.

"It turned out I wasn't good enough even to be a rock star," he said.

He went on to study business at the University of Southern California, where he graduated in 1987. He then borrowed some money from his father and built a 21,000-square-foot recording studio in downtown Los Angeles.

Koch spent a few years in the music business, maintaining his studio and managing bands, but eventually the business side of music began to wear on him. It was around that time Koch said he discovered "good beer."

"I just took to it," Koch said. "I started going to beer festivals and visited about 130 breweries."

In 1993, Koch enrolled in a class at UC Davis called the "Sensory Evaluation of Beer" where he bumped into Steve Wagner. Wagner, a musician, recognized Koch because he had used his recording studio.

The two began talking beer and eventually decided to form a brewery. But neither wanted to do it in Los Angeles or in Wagner's home of Portland, Ore. They settled on North County after Koch visited some friends in Solana Beach in 1995 and fell in love with the area.

Koch rented an apartment in Solana Beach where he and Wagner did their test brewing and organized the company. Koch got the name "Stone" after seeing the word on a CD jewel case. He felt the word conveyed a certain natural, earthy quality, he said.

"It really captured the basics of how we saw ourselves," Koch said. "We have pretty strong opinions about what good beer is and we wanted to convey a strong message that it shouldn't be filled with junk."

That message was also conveyed through the company mascot -- a sneering gargoyle -- which the company states is meant to "ward off modern day evil spirits such as chemical preservatives, additives and adjuncts."

Koch and Wagner, the company president and brewmaster, launched Stone Brewing in 1996, churning out its first beer -- Stone Pale Ale -- at its brewery in San Marcos.

The first couple of years were a struggle. The company lost around $20,000 to $30,000 a month due to high distribution costs and did not have its first "break even" month until March 1998, Koch said.

The company has maintained steady growth since then, with sales increasing an average of 43 percent since 2000. The company now has 85 employees, more than double what it had five years ago.

Koch said that while his company has experienced fast growth up to now, he hopes the next few years will be a period of sustainable business.

Fond of musical analogies, Koch likens his company to bands like the Grateful Dead, Jimmy Buffett and Metallica who developed a loyal fan base without catering to what the masses wanted in order to make a quick buck.