Century-old firm looks to be 'dominant brokerage' in Southern California

There are two ways, good or bad, to view Paul Hering's promotion to managing director of San Diego's Barney & Barney. 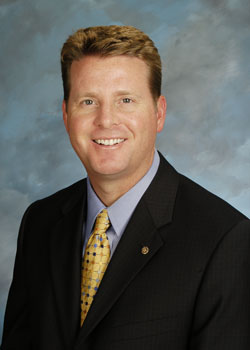 Good: He inherits an established, 96-year-old business with 225 employees, $40 million in revenues last year, and a near 20 percent compounded growth rate in sales every year since 2000.

Hering believes anything is possible. He challenged Barney & Barney to change its hiring practices, challenged employees to find balanced success in business and family, and now he's challenging the company to change the way it has operated for the last 20 years.

Barney & Barney is the oldest and largest privately held insurance brokerage in San Diego County. All of the firm's employees are based and sales generated out of one office in La Jolla. But, to maintain the company's growth rate, Hering believes the company needs to expand.

"We think possibly Orange County or Riverside County (are places) we'd like to go in and tell the Barney & Barney story," Hering said, adding that his vision is for Barney & Barney to become "the dominant (insurance) brokerage in Southern California."

His single stipulation is any expansion must be organic.

"We're so protective of our organizational values and culture that to be a big (mergers and acquisition)-type organization you would have to do deals and maybe align yourself with organizations or people that are different than you are," Hering said. "We have over time really wanted to protect the organizational culture that we have ... we still operate somewhat like a family business."

Barney & Barney, too often confused with stock brokerage Smith Barney Inc., might not be that well known to the average resident, but it is a giant in the local insurance market.

The company, founded in 1909, sells insurance to as much as one-fifth of the San Diego market, and industry publication Business Insurance ranked Barney & Barney the No. 7 largest private insurance brokerage in California and No. 60 in the United States.

The business has three units: commercial property and casual, which accounted for more than half of revenues last year; employee benefits, that include health care policies and at least 40 percent of sales; and the programs unit, which includes a small business division, financial services and initial public offerings.

Barney & Barney's typical client is a midsized business with annual revenues of $3 million to $5 million.

Top performers are offered ownership stakes in the company, which they must sell upon retirement. By doing so, the company maintains cultural and enterprise continuity, uncomplicated management successions and engaged employees. The firm currently has 19 owners.

Hering doesn't like to admit it, but he was being groomed for the top position. Shea wanted his successor to come from within Barney & Barney, and he didn't need to look far.

A 20-year veteran of Barney & Barney, Hering was most recently manager of the important commercial unit.

Hering was a rising star from the beginning; he became an owner at 27 and was instrumental in changing the company's hiring practices several years ago.

For years, Barney & Barney resisted hiring brokers straight out of college. New graduates were thought to be too immature or easily lured to competitors once trained.

Instead, the brokerage preferred hiring policy underwriters, which is what Hering did for two years at Chubb Corp. (NYSE: CB) before joining Barney & Barney. He has a bachelor's degree in economics from the University of California, Los Angeles.

Hering surmised new graduates were more likely to stay once they experienced the culture and reward system. Still, he estimated a 50 percent turnover rate.

Since the hiring policy was implemented, Barney & Barney has not lost a new graduate and this year extended ownership to the first two college students hired. The company now participates in college career fairs.

Hering has also called for employees to lead balanced lives. It's a soapbox issue for him.

Hering finds balance in spending time with his family -- he and his wife have three kids, two are teenagers -- golfing, and vacationing at a home in Canyon Lake in Riverside County.

Community involvement is one of the distinctive traits of Barney & Barney's culture.

"That's a big thing we've believed in forever," Hering said. "I remember joining Barney & Barney and (former managing partners) Bruce Moore and Larry Shea, two icons in our organization, sat me down and said 'One of the things about being at Barney & Barney is you're not just here to be an insurance guy, we want you to be out there in the community giving back and being part of it.' We need to continue to be that."