Juanita Brooks isn't one to set limits for herself or let them be placed upon her. It took her just three years to graduate from college, and as a spunky 23-year-old attorney, she argued a case before the Ninth Circuit Court of Appeals. 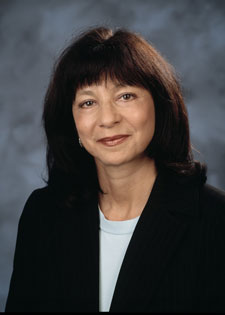 By 32, Brooks had her own thriving practice, defending celebrity clients like John DeLorean and the sons of the Rev. Jesse Jackson.

Before her 50th birthday, she switched her specialty three times, eventually taking on the complicated area of patent law.

For the principal attorney in the San Diego offices of Fish & Richardson PC, it's all about staying fresh.

"I love it," Brooks said. "At my 25th (law school) class reunion, I was one of the few people who weren't burned out."

The 51-year-old's next challenge is helping plan and implement the strategic direction of the entire Fish & Richardson firm.

She recently was selected to the firm's nationwide management committee, becoming just the second woman to attain such a position in the firm's 126-year history.

"It gives me a tremendous sense of accomplishment," Brooks said. "I took it because I thought I could make a difference, and I did it for all the women here and for all the women to come. It shows women can be at the top levels of the firm."

The management committee comprises six attorneys. They're responsible for Fish & Richardson's nine offices and 320 attorneys throughout the country.

Primarily raised by her mother (her dad left when she was 9) in the poorest areas of Riverside, Calif., Brooks did what she would to help out the family, which included her older sister. She ironed shirts and even ran a day care out of the house during her pre-teens.

"I give my mother major credit for instilling a great work ethic in me," Brooks said. "I was determined I was going to get out of Sunnymeade and provide a better life for my sister and mother."

She discovered an affinity to debate while attending San Diego State University, where she earned a political science degree in a mere three years because, "that's all I could afford," she quipped. Encouraged to pursue law school at Harvard by an SDSU professor, Brooks applied to both Harvard and Yale even though at the time it "never occurred to me to apply to an Ivy League school."

She was accepted to both but chose Yale, which became the true turning point in her career.

Upon graduation from law school, Brooks joined the federal defenders' office in San Diego, where she got to appear before the Ninth Circuit Court of Appeals as a 23-year-old. "Some never get a chance to do that," she said. "My hands were shaking when I was sworn in."

In 1986, she was co-counsel in the defense of John DeLorean, who was accused of embezzlement. The day DeLorean was acquitted, a limo whisked Brooks and the rest of the defense team from the "Today Show" to "Good Morning America" to the "CBS Morning News." The verdict appeared on the front page of every major newspaper in the country.

"It was absolutely surreal," she said of the three-month trial in Detroit. "You'd come to the courthouse every day and you'd have to run a gauntlet of media reporters and cameramen trying to get their shots. No cameras were allowed inside the courtroom, so outside, cameras were clicking away."

Brooks' notoriety grew and soon she was receiving calls for legal help from Jesse Jackson. After awhile, the thrill of white-collar criminal defense fizzled. She needed something else and moved over to tricky "product liability" defense, successfully defending her client in the notorious Fen-Phen diet drug case. That type of law involved "only" causation, so Brooks soon began looking for another avenue to showcase her skills.

"I asked myself, 'How can I combine technology and a really complex aspect of the law?'" she recalled. "I said, 'I think I'll do patent law.'"

"This is my last metamorphosis," she insisted. "What Everest is to a mountain climber, patent law is to a trial lawyer."

Brooks, who joined Fish & Richardson in 2000, has enjoyed the same success as a patent lawyer as she has everywhere else. A jury in Delaware deliberated for a mere 37 minutes -- a record -- before returning a verdict in favor of Brooks' client in 2004. And she's done it without having a technical degree.

She credits good friend Cat Bennett for shaping her legal and personal career. A pioneer in the field of jury consulting, Bennett died of breast cancer in 1996 at age 41.

She is married to Lewis Rubin, a leading expert in pulmonary hypertension, and has two children, daughter Rose, 13, and son, Jai, 10.

Brooks, who's been voted by her peers as one of America's Best Lawyers since 1987, is on the board of the Western Center of Law and Poverty. The group strives to ensure adequate housing, medical care and foster care for low-income families and individuals. Acting as co-counsel in her capacity with Fish & Richardson, Brooks and the group are trying to expand the number of individuals and families who would qualify for County Medical Services.

Brooks downplays her versatility, claiming all the areas in which she's practiced are similar in certain aspects.

"You take information, digest it and, in turn, communicate it to the jury," she said.

Easy for her to say.