Rising to the top

On a typical morning when Susan Nowakowski isn't jetting across the globe to conduct business for AMN Healthcare Services Inc. (NYSE: AHS, Research), the president and chief executive officer wakes up at 4:30 a.m. and begins her day running or pumping iron. 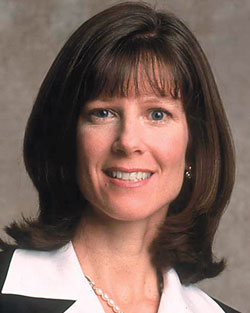 "It releases stress for the day," she said, smiling during a recent interview. Her fresh demeanor is impressive for someone who just spent 11 hours on a plane returning from a business trip in London.

After her workout, the 40-year-old heads back home and fulfills her morning duties as the parent of two kids. The traditional stay-at-home-mom label does not stick to this household, nor does one of an urban lifestyle accommodated by a nanny and full-time housekeeper. When Nowakowski leaves for work, her husband stays, consulting part time on the side; the two are determined to raise their family themselves.

"We try to keep a fairly normal family life," she said. "(My husband) is phenomenal. He should get father of the century."

By 8 a.m. she's in the office, helping to run a corporation that: employs approximately 6,350 nurses and allied health-care professionals; posted a net income of $4 million for the first quarter of 2005; generated $629 million in revenue last year; was ranked San Diego's 12th top public company based on fiscal 2003 revenues; and was dubbed the country's chief supplier of temporary health care staffing professionals.

Nowakowski's latest leadership position, which began May 4, poses a surfeit of challenges, both personally and professionally -- but she's not one to cower. Fear is an emotion the CEO first began conquering the moment she moved to California by herself as a jobless 20-year-old college graduate.

"Putting yourself in the position of an opportunity, which can mean taking risks, is not a particularly comfortable feeling," she said. "But one of the most important lessons I've learned is to be yourself and be sincere. You will be successful because of who you are and not who you pretend to be."

And Nowakowski knows who she is: An accomplished businesswoman who has a bachelor's degree in accounting and economics, a master's in business administration from San Diego State University, and has spent 15 years at AMN, serving as the company's chief operating officer, chief financial officer and senior vice president of business development. This extensive background primed her for the current job.

"It's been a long transition over the last couple of years, which made it a smooth transition," she said of her promotion, noting that the timing of company founder Steve Francis' decision to relinquish his CEO title and run for mayor was coincidental. "The more responsibilities you have, the more stress it puts on you. ... But when there are difficulties that come, I'd rather focus on the opportunities."

One of those opportunities includes broadening the company's economic scope and branching out beyond nurses to other allied health care professionals such as physical therapists and contract physicians. Making this move would allow AMN to continue profiting from an industry whose labor pool Nowakowski called "relatively stagnant."

"The gap between demand and supply has grown more," she said. "But it's a great opportunity to help our hospitals. Our challenge is getting enough supply to meet a demand where nurses are needed. ... Labor challenges are going to get difficult in the next three to five years, and for a period of about nine years, there will be far more people retiring.

"We will have to find creative ways to deal with labor challenges," she added.

Nowakowski also said in the health care industry it is becoming harder for hospitals to manage need, build facilities, take care of aging populations and mollify a burgeoning staffing crisis. While hospitals attempt to handle these dilemmas, AMN must deal with another issue that cost the company $1.5 million last year: the Sarbanes-Oxley Act of 1992.

The CEO admitted that the law -- designed to sustain corporate responsibility and improve accounting accuracy -- is important, but should be revised.

"I don't think the cost-benefit has been there," Nowakowski said. "We could've taken those dollars and reinvested them into the business line to generate greater revenues for shareholders. I think (the government) could further refine the requirements so it's less expensive but still accomplishing oversight."

Despite these factors and others that make for a hectic job, once the clock strikes 5 p.m., Nowakowski tries to stop toiling -- at least for a few hours.

"There are sacrifices you make and the feeling that you could do more," she said. "I try to juggle my responsibilities as best as I can and not feel like I have to do everything.

"I like to hang out with my kids and be with my family. We'll eat dinner, I'll make sure they do their homework, tuck them in for bed, and then I work some more."

Which may explain how this small-town woman from Nebraska has become the highest-ranking female CEO of a public company in San Diego.