In a city looking for leadership, Robert Watkins has stepped forward to drive a local organization into a new era while turning his attention to improving public education in the county. 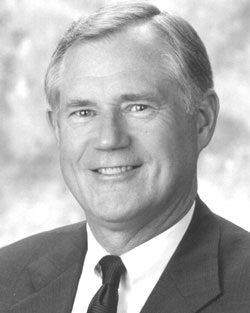 Watkins is an active member of San Diego politics, influential in Republican circles, serving as chairman of the San Diego County Lincoln Club.

He played a key role in transforming the group from the Golden Eagle Club that operated in the 1980s to the Lincoln Club, a popular and respected business advocacy group in the city.

The club was a right-leaning group of people "interested in politics, elements that drive the economy," Watkins said.

The mission became skewed when a segment of the organization wanted to use the group to forward a position on gun control laws.

"I stepped out at that point," Watkins said.

The group began to lose some of its membership and it wasn't long until its leadership was approached by Lincoln Club chapters in San Francisco and Los Angeles.

The organization took the Lincoln Club name and created a strong connection with other clubs, Watkins said.

Watkins recently became chairman of the organization in a time where politics is anything but calm in the city, which suits many of the members.

"Bob is a doer. He likes action," said Chris Niemeyer, executive director of the San Diego Lincoln Club. "In an environment like downtown, where people don't like stepping on toes, Bob wants to see things get done. That's separated him out from other people."

The Lincoln Club, however, other than hosting a June 16 mayoral debate, has kept a quiet role leading up to the July 26 primary election.

The organization, which boasts a membership base of "politically like-minded business and civic leaders throughout the country," reportedly played an active role in convincing Steve Francis, a former executive of AMN Healthcare (NYSE: AHS), into running for mayor.

Francis is listed on the club's Web site as a director.

The Lincoln Club, however, has not endorsed anyone for the primary, which will pit five Republicans against one another and various other candidates.

Watkins said it's in the best interest of the organization -- and perhaps the Republican Party as a whole -- to not take sides in this election.

"Rather than thrusting ourselves into a divisive situation, we figured it would be best to back off and support all of the candidates," Watkins said. "We are also interested in hearing each of the candidates articulate what needs to happen in the city."

The organization, however, will likely endorse a candidate if a runoff occurs, Watkins said.

The organization is looking for a candidate that can face up to special interests like labor that "control the council," make efficiencies in the bureaucracy and make tough decisions, Watkins said.

Likening the city's current fiscal crisis to a "kidney stone," Watkins said the crisis "will be passed with the right leadership."

Using his experiences in politicking at the Lincoln Club, Watkins recently threw his hat in the ring and was appointed president of the County Board of Education.

For his day job, Watkins, 62, is chairman and CEO of R.J. Watkins Consulting, a recruiting firm specializing in high-tech defense contracting.

His resume is rife with experience in human resources at large corporations, such as Mattel Inc. (NYSE: MAT), and afforded him an opportunity to travel around the world implementing business efficiencies.

The impetus for running for the education seat came from years of political activism and a sense that now might be the best time to give something back to the community.

Pulling from his business background, one of Watkins' top goals for the office is to streamline the district and begin instituting performance-based compensation for teachers.

"We want to make sure that the people that want to teach, and teach well, get paid well," Watkins said.

Not all of these changes are being greeted with open arms by teachers in the district, Watkins said.

"These kinds of changes are the changes we see in the business world and come as a little bit of a change to some working in public schools," Watkins said. "The important thing is that you sit down with people and explain to them the kinds of changes you have in mind.

"You have to communicate to your troops," Watkins added.

Representatives of the district are not shy about discussing the different attitude Watkins brings the board.

"There is room in public education for healthy debate on lots of issues. Bob enjoys being part of that debate. The rest of the board appreciates his perspective," said Jim Esterbrook, a spokesman for the school district. "They don't necessarily agree with him on everything, but there is nothing wrong with that. His viewpoints are not extreme."

Watkins envisions instituting plans where teachers that perform are rewarded monetarily and those that don't make the grade are held accountable.

"Labor costs make up 87 percent of the budget," Watkins said. "They have to come to the negotiating table and discuss the things that make teachers more accountable."

Just a few weeks into the job, he's facing a political fight to keep 3 cents on every dollar in the district budget.

Earlier this month, the County Board of Supervisors passed an ordinance to take some school district funding and transfer it to consolidate and streamline firefighting operations.

"To arbitrarily draw 3 cents on the dollar from an already taxed budget is just wrong," Watkins said. "I think the county can do some efficiency studies of their own and come up with funds for firefighting costs."