Cox has studied San Diego's economy for more than 20 years

Marney Cox's business cards don't lie: He is an economist. Economists tend to group things in numerical categories, because their jobs entail forecasting the impact of any number of variables. Inevitably, that grouping appears in the way they communicate. 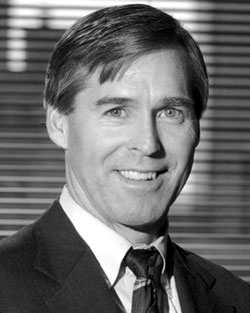 For example, when asked about his job as the San Diego Association of Governments' top economist, Cox said: "There are four things I need to be able to do ..." Or, in explaining the impact of the forecasting model he helped develop in the 1970s, which is still used by SANDAG today: "Its three uses are ..." Or, what exactly the term quality-of-life means: "There are three E's ..."

Cox, 54, is arguably the most visible economist in San Diego. His economic and demographic research on San Diego County has influenced more than 20 years of local public policy including, most recently, TransNet, a regional highway improvement plan funded by a voter-approved sales tax.

In that respect, Cox has meant more to the San Diego economic scene than the Nobel Prize-winning faculty members at the University of California, San Diego.

Although highly visible, Cox's appearances in the media typically involve discussing the policy initiatives supported by SANDAG's research. As chief economist at SANDAG, the region's association of local governments, Cox is frequently called upon.

Cox was born in Hawaii as the fourth of six children -- two girls and four boys. His first name is a combination of his mother's name Marie and his father's name Franey.

Franey served 30 years in the U.S. Navy and was stationed in San Diego early in Cox's life. When he retired from the military, the family moved to Lancaster, Calif., where Cox grew up and attended junior college before transferring to San Diego State University. Cox has bachelor's and master's degrees in economics from SDSU.

Cox originally was a business major, but switched after taking courses in economics, which were, and still are, required for the undergraduate business degree.

"Well, when I took economics courses I liked them a heck of a lot more than business courses and I switched majors," he said. "Luckily for me, I did well and my grades improved dramatically because of the switch. It just seemed to click, which is all you can hope for when you're going to school."

From the beginning, Cox was enamored with the forecasting aspect of economics. Although forecasting relies heavily on dense econometric and statistical analysis, it's most enticing because it allows the researcher to see into the future.

It was the opportunity to work on a groundbreaking forecasting model that lured Cox to SANDAG, then known as the Comprehensive Planning Organization, in the late 1970s from his first post-college employment as economic researcher at the San Diego Regional Chamber of Commerce.

"When I first got to SANDAG, I did long-range econometric forecasting," Cox said. "I was working with the guys who put it together and on the actual structure of the model."

The team in charge of the model spent six years adding data to the model and tweaking it so that results matched or were not significantly different from actual figures.

The model, originally designed to predict population growth, is still used by SANDAG today. However, there are more equations and so-called data characteristics, and it has much broader use.

"It's still doing, functionally, the same thing it was doing in the past," Cox said. "But now, its three uses are as a database ... second as a forecasting model with a 30-year time horizon for 230 data characteristics for San Diego and third as an impact simulation model."

Cox led a complete overhaul of the model in the early 1990s to create the 16 employment clusters used today to monitor the relative strength of San Diego's economy. They include just about every local business sector, such as biotechnology and pharmaceutical research to computer services to defense and transportation manufacturing.

The clusters were created to explain the growth in the local economy despite declining manufacturing jobs, massive cutbacks in defense spending and falling real estate values from the liquidation of savings and loan institutions.

"At the time, we didn't know what was driving the economy," Cox said. "This cluster analysis helps (San Diego) regions track what's driving their economies."

More recently, Cox and his team of eight economists at SANDAG created a sustainable competitive index to compare San Diego to similar regions.

Future SANDAG moves depend on what the forecasting model shows. The current dearth of affordable housing and rising populations could continue to weigh on regional infrastructure, impacting San Diego's quality of life that is measured by economy, environment and equity indicators.

As Cox sees it, the San Diego region will need SANDAG for guidance in preventing stifling future economic growth. But, it won't need a larger SANDAG. San Diego needs an efficient planning organization that builds coalitions and delegates to members.

"It keeps SANDAG from becoming too much of a bureaucracy and I think that's what people hate," Cox said, adding, "if you keep the organization small enough you can always change direction."