Passionate about their craft 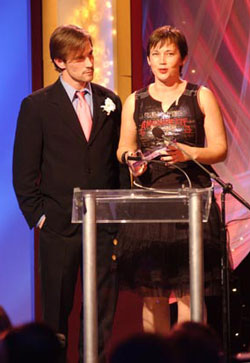 Francis Gercke and Kristianne Kurner, co-founders of New Village Arts Theatre, accept the award for Outstanding Ensemble for "A Lie of the Mind" at the 2004 KPBS Patte Awards.

Or rather, it's more precise to say that the co-founders of New Village Arts Theatre in Carlsbad are relentless overachievers. In a very short amount of time, the theater -- which opens its fourth season Aug. 12 with "Two Gentlemen of Verona" -- has garnered more than a dozen awards and received critical praise for its presentation of weighty, challenging work.

Still, the husband and wife team that relocated to North County by way of New York and Los Angeles aren't quite satisfied. They have great ambitions for NVA.

"I think about what we don't have," said artistic director Gercke in a recent interview. "There's always an eye toward what else you can do," added managing director Kurner.

Gercke, 35, and Kurner, 33, often finish each other's thoughts and sentences. Having a conversation with the pair is like watching a game of tennis. They'll bounce ideas and answers off each other and almost forget you're in the room. They share mutual respect and admiration, and complement each other well -- she's businesslike yet gracious; he's intense and funny. You get the sense that they complement each other in their working lives, too.

The couple, married now for more than a decade, met while completing undergraduate studies at the College of William & Mary in Virginia. After graduation they moved to New York, where Kurner and Gercke attended the famed Actors Studio. They married while in graduate school and actually had a few weddings -- including a traditional Catholic wedding and a decidedly nontraditional wedding in which Academy Award-winning actress Ellen Burstyn performed the nuptials.

The pair then moved to Los Angeles, and shortly thereafter gave birth to son Jonah. The family relocated to San Diego, not just to start their own theater company, but also to be close to Kurner's parents, and partly because the "Hollywood thing" just wasn't for them. The move also meant a more stable life for their son, and doing the kind of theater that excites them.

"We became very passionate about a certain way of working that we learned from our main teacher in New York, and we believe in it very strongly," said Kurner, referring to what they call human-based theater. The method is based on an understanding of how people behave.

"What makes theater an art form is human beings sharing themselves on stage," Kurner said. "Rather than taking ideas and concepts out of other areas, you start from who you are, and then layer on everything else... So I don't want to see your idea of Ophelia, I want to see you first in the situation of Ophelia, and then we'll put everything else in."

This lends a naturalness and authenticity to performances. Acting, said Gercke, isn't about portraying emotion. It's about feeling emotion.

"If we're to gain anything from acting, it's the possibility of watching a human being actually going through something," he said. "If we're in a love scene together and I actually try to seduce you, it's going to create a reaction -- you're either going to like it or you're not. It's going to cause you to react a certain way. When that begins to occur, the audience will sit up and take notice."

Audiences and critics alike have taken notice. The theater has received a number of honors, including KPBS Patte and San Diego Theatre Critics Circle awards. Most recently, The San Diego Foundation recognized the theater's outstanding work with an $11,750 grant to support NVA's annual Shakespeare in the Park event.

"What's great about this programming is that they bring free Shakespeare to the community in Carlsbad," said Julie Fry, the foundation's director of arts and culture analysis and strategy. "They anticipate 5,000 to 8,000 people of all ages and all income levels.

"New Village Arts has, in a relatively short period of time, really made a name for themselves in the community, through their acting and directing work, but also through a strong collaborative process, which is also what we look at (in awarding grants)," Fry added.

The free performances of "The Two Gentlemen of Verona" will run Aug. 12-14 and 19-21 at 7 p.m., on the lawn at the David H. Thompson Performing Arts Center at La Costa Canyon High School in Carlsbad. The foundation grant will go toward purchasing new lighting and sound equipment and supporting the artists' stipends.

In an era of budget cuts that hit the arts sector especially hard, grants like these, corporate sponsorships and private donations make theater at NVA possible. The company has an anticipated budget of $100,000 this year, and just three full-time staff members (Gercke, Kurner and her mom, Laura Kurner).

The little theater that could has a lot of room to grow and high expectations. Long-term goals include creating an acting ensemble, increasing the theater's educational component, producing new work and supporting playwrights in residence. In the more immediate future, NVA is looking for its own theater space; the company currently stages shows in studio space donated by Jazzercise Inc.

Kurner and Gercke have learned much of the business side of theater by doing, with a little bit of luck and "making incredibly smart decisions," said Gercke.

"I don't know there's anything that prepared us for this other than a conviction -- this is what we believe in, we think that people might want to invest in it and purchase it, and how do we stay true to that vision?" he said.

Staying true to their vision of producing thought-provoking, relevant work sometimes means choosing integrity over revenue. The theater's philosophy is to do work it's excited by, that speaks to the community and its experiences, whether that community is Carlsbad, San Diego or the nation.

NVA doesn't do musical theater, usually a surefire moneymaker. Instead, the theater produces plays like Sam Shepard's "A Lie of the Mind," Emily Mann's "Still Life," which looks at violence in America through the eyes of a Vietnam vet; or Kenneth Lonergan's "The Waverly Gallery," about a woman with Alzheimer's and how it affects her family -- meaty shows that Kurner said can be "a tough sell."

"I never thought it was going to be as hard, or as much work as it is," Kurner said. "When you work so hard on something and you're not rolling in money -- in fact, we sacrifice a lot to do it -- well, then you'd better do stuff that you really believe in and that you care about."

"We've made mistakes. We worry about putting butts in the seats and being able to pay bills, but we try not to do fluff," added Gercke.