'Not a time to mince words'

The plaque is prominently displayed on the crowded walls of his 16th floor office. As you enter the room, your eyes are drawn to the massive wooden rectangle that contains a simple message:

"The city attorney is to be elected by the people. This is a guarantee that the legal head of the government will be able to fearlessly protect the interests of all San Diego and not merely be an attorney appointed to carry out the wishes of the council or manager." 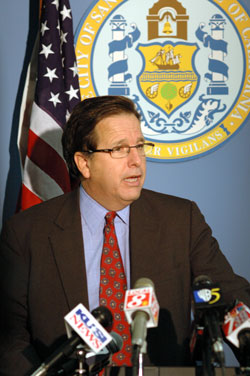 The passage, enlarged from a 1931 brochure promoting the need for an independently elected city attorney, has become the mantra of City Attorney Michael Aguirre. All of his current actions can be traced back to his belief in fulfilling the ideals of the phrase, a version of which is contained in the City Charter.

"I feel the people of San Diego have trusted me by voting me in, and I don't want to let them down."

Elected to the post last November, Aguirre has taken office during one of the most turbulent times in the city's history. The well-documented problems facing the city include a pension deficit estimated at more than $1.37 billion; a plummeting bond rating fueled by a pair of unfinished audits; and investigations by, among others, the Securities & Exchange Commission and the U.S. Attorney's office.

Some would add the feisty Aguirre to the list, having watched him launch his own investigations and lawsuits against current and former city officials.

"It's not in me to sit by and just idly watch the city slide down into the abyss without at least making some effort," he said, "and getting the public aroused and interested in understanding there are options that provide us hope. I think anyone that's elected has that obligation."

The city attorney's office has conducted an ongoing investigation for the past nine months, producing six mountainous reports detailing the flaws in the pension system. Declaring illegal pension benefits granted in 1996 and 2002, Aguirre has repeatedly called for their rollbacks.

This spring he publicly called for the resignation of former Mayor Dick Murphy and now seeks the same from City Manager Lamont Ewell, along with various other city officials.

Aguirre is unapologetic about his approach.

"This isn't a time to mince words because we're too close to the edge," he said. "The consequences of complacency are too dangerous. That's how we got here."

His detractors paint him as a power-hungry opportunist running amok in City Hall. He's been called a megalomaniac, a bully and a detriment to the city. The police union is suing to get him removed from office, accusing him of offering a $650 million bribe.

The resistance comes from officials who don't want to take responsibility for the city's current crisis, Aguirre said.

"They like me when I tell them what they want to hear, and they dislike me when I don't," he said. "I live, in some ways, in a very divided kind of existence. On the one hand, the rank-and-file members of the community are very supportive. On the other hand, the insiders of City Hall are not."

Aguirre suggests the needs for a "massive replacement" of personnel in City Hall. He isn't against the idea of promoting from within, believing there are many quality city employees in place now.

"We are leadership bankrupt if we're not financially bankrupt," Aguirre said. "We need a lot of new blood to re-establish our credibility.

"Here we are facing the greatest financial crisis in the history of the city, and the council is off on a four-week vacation, which is just mind-boggling. We haven't had a single council meeting focused on the solutions to the pension crisis since it started 17 months ago because no one wants to talk about it."

Aguirre talks about a reorganization of city government, one that doesn't cater to special interests like corporate sports, developers and the employee unions.

While admittedly not a legislator, that hasn't stopped Aguirre from issuing his own plans for the city. He recently unveiled a 15-point blueprint to jumpstart the recovery, using a nearly hourlong press conference to detail it.

Some council members quickly criticized him for stepping outside of his responsibilities.

A graduate of Arizona State University and the University of California, Berkeley Law School, Aguirre also holds a master's degree in public administration from Harvard University.

In the 1970s, while working for the U.S. Attorney's office, he helped expose a massive pension fraud case involving a San Diego labor union, resulting in the conviction of 17 people. It led to an appointment to work for the U.S. Senate, where he investigated a nationwide organized crime employees' benefit fraud scheme.

A native San Diegan, he opened his own practice in 1980.

"I've always wanted to be in public service from the time I was in college," he said. "I was really inspired by really great political figures when I was young."

Aguirre's zest for public service was reinforced in 1993, when he defended Cesar E. Chavez in a case pitting farm workers against a large grower conglomerate. He moved to Yuma, Ariz., for several weeks, eventually winning the case on appeal.

Aguirre isn't completely disappointed with City Hall. He's quick to praise many employees, including the newly installed city auditor and city clerk. He also has high regard for his staff, saying they've accomplished more than several highly paid outside consultants, whose investigations he terms as "whitewashes."

"The most important thing is we break the culture of secrecy, and we re-establish the culture of integrity within the city," he said. "We're headed for a real showdown. There's a huge conflict right now in San Diego between the forces of reform and the forces of cover-up in the city. And it's become clearer and clearer."