NEW YORK CITY -- A new design for New York City's Freedom Tower, the successor to the World Trade Center and centerpiece of a $12 billion rebuilding effort, was made public Wednesday after police criticized security of the previous plans.

The tapered, glass-walled skyscraper will rise 69 stories from a fortified base to an observation deck at 1,362 feet, and a glass parapet at 1,368 feet, equaling the heights of the twin towers destroyed by terrorists on Sept. 11, 2001, according to plans posted on the Web site of the Lower Manhattan Development Corp., the state agency overseeing the rebuilding.

A spire supporting TV broadcasting antennas will bring the total elevation to 1,776 feet, a symbolic reference to the year the U.S. declared independence, and ranking it as the world's second-tallest building. The spire will emit light, to serve as a "beacon of freedom," according to the plans.

"The Freedom Tower will not only be a tremendous icon, it will also be an economic engine generating thousands of jobs for New Yorkers," Gov. George Pataki said in a statement on the Web site. "This new design reflects a soaring tribute to freedom and a bedrock commitment to safety and security."

Pataki ordered the redesign by architect David Childs in May after New York City Police Commissioner Raymond Kelly provided officials with a report on the building's potential vulnerabilities, including susceptibility to a truck bomb. 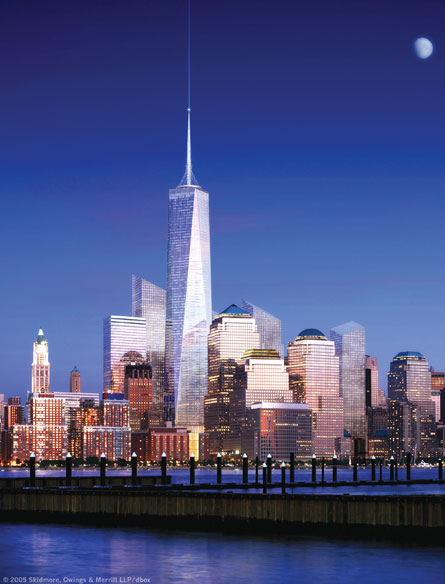 The new design incorporates a 200-foot by 200-foot base, matching the "footprint" of the twin towers. The base, draped in a "shimmering metal surface," rises 200 feet and includes an 80-foot-high public lobby, according to the plans. Above the base will be 69 office floors, with 2.6 million square feet of space. The square format gives way to eight "tall isosceles triangles," with the cross section of the tower forming a "perfect" octagon in the middle, according to the plans.

The mast at the top will contain an antenna for the Metropolitan Television Alliance, a consortium of New York TV stations, and will emit light, evoking the Statue of Liberty's torch, the plans said.

"This spectacular addition to our skyline will be a commanding architectural symbol while addressing the security concerns we face in today's world," Bloomberg said in the statement.

The rendering released today is the third version of the Freedom Tower to be shown to the public. The first, presented in early 2003 by architect Daniel Libeskind in his master plan for the 16-acre site, called for a 70-story tower with a needle-like spire attached to its western side and rising to 1,776 feet.

Developer Larry Silverstein, who holds the lease on the trade center from the Port Authority of New York and New Jersey, rejected the original Freedom Tower design and made Childs, of Chicago-based Skidmore Owings & Merrill LLP, the tower's lead designer.

The second design, also 1,776 feet tall, was a 72-story twisting structure topped by windmills and a lattice of cables with a side-mounted spire and a slanted roof championed by Libeskind to evoke the Statue of Liberty, which stands south of the site in New York Harbor.

That design was ruled out after New York City police said the tower's planned location, 25 feet from West Street, a six-lane highway, would be vulnerable to attack by a truck bomb. In the new design, the structure is farther from the street.

The latest design eliminates all but one of the elements Libeskind envisioned, its height. Gone are the side-mounted spire and the slanted roof.

Also removed are flourishes that Childs championed, such as the wind turbines that were to supply the tower with up to 20 percent of its power, and the crowning cable-mesh structure, meant to evoke the cables of the Brooklyn Bridge.

The new plans position the tower at an average of 90 feet from West Street. The base will be blast-resistant, and the safety systems in the building "exceed" city building codes, according to the plans.

Pataki and Bloomberg said redesigning the tower for greater security will attract tenants to the site, which has twice been attacked by terrorists.

The governor hasn't ruled out the possibility of a public subsidy for the Freedom Tower should security costs make it impossible for Silverstein to offer space at going rates.

The tower's 20-ton cornerstone, dedicated to the victims of the Sept. 11 attacks, was laid last July 4 in the 70-foot-deep pit of the trade center site.