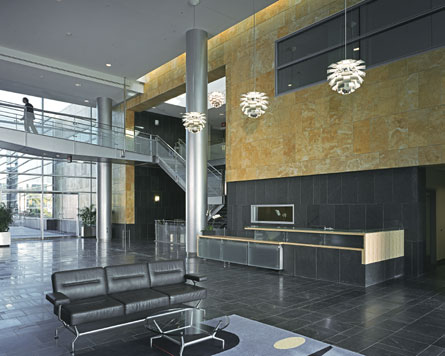 "We can say, 'we're doing an outstanding job,' but this is an independent agent saying this is the criteria. It's an external certification of what we've been doing all along," Loukides said, adding the La Jolla facility will be the company's first research and development location and the second J & J building to receive this certification.

The LEED rating system is a voluntary, consensus-based national standard issued for developing high performance, sustainable buildings. Only 261 buildings in the nation are LEED-certified.

The facility complied with the executive order by Gov. Arnold Schwarzenegger regarding greenhouse gas emissions, which established aggressive statewide emissions reduction goals through 2050.

Features at the facility include a combined heat and power cogeneration system, which reduces CO2 greenhouse gas emissions that is approximately equal to removing 285 cars from state roadways each year, according to the company.

"This building is a reflection of innovation," Loukides said.

"It lowers our operation costs," he said.

Kling designed the facility that had to be equipped with fume hoods, which are designed to ensure proper ventilation of hazardous fumes, and other specialty equipment for research and development. He said fume hoods require fresh air, which puts a strain on the air-conditioning system. But he said Kling made sure the facility met the minimum air requirements.

Similar to other companies, which have designed their buildings to be environmentally friendly, J&J receives incentives for its facilities.

The company received a rebate from the San Diego Regional Energy Office of $790,000, and $150,000 from San Diego Gas and Electric for exceeding the requirements of the state-run "Saving by Design" program, which establishes a design standard and dictates a certain level of energy efficiency, he said.

In addition to water conservation and cogeneration systems, the facility is also prepared for the inclusion of solar panels.

"We've designed infrastructure to support solar panels," Loukides said, adding this was done three to five years ago. "We considered adding them, but made a decision to wait until the technology had stabilized."