Australia-based Constellation Property Group, which already has major projects in the works in San Diego, unveiled plans for a 371-unit, high-rise condominium complex called Revolution that will be developed along National City Boulevard between 11th and 12th streets in National City.

Eugene Marchese, principal of Constellation Property and Marchese + Partners, Mr. Marchese's architectural arm, said he is excited to be coming into a community that has often been considered the forgotten stepchild of San Diego 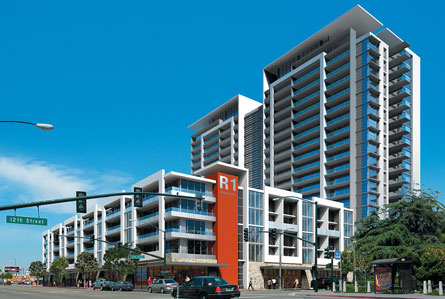 "National City is a vibrant, energetic city that is full of life and rich in culture," said Marchese. "The city is finding itself at a pivotal time, where change is occurring and a new vision for the future is being realized. Revolution is part of the future of National City -- stylish, modern living that fits the needs and desires of National City's future generations."

Marchese said he is hoping to get approvals from the National City City Council by the end of September. Under that timetable, ground could be broken for the 76-unit first phase by mid-November. The initial phase could be expected about 12 months later. All of the units in the first phase will be two-bedroom condominiums in four-level configurations. The next two phases would be built concurrently. One of these would have 249 units built in a 23-story tower. These units would have one- to three-bedroom floor plans.

The remaining 46 units would be placed in a third phase at the center of the development. The second and third phases are expected to come on line in February 2007.

The floor plans for all the units in the development range from 698 square feet to 1,527 square feet. The prices will range from $375,000 to $2 million for the penthouses.

"These will have views that are better than in downtown San Diego," said Anthony Napoli, Constellation marketing director.

The project will feature floor-to-ceiling windows. The common areas will include a pool, cabanas and extensive landscaping.

To be built where a small office building and the Lourdes Restaurant are today, the project will have 15,000 square feet of retail space on the ground levels. The restaurant will return inside the project after construction.

Marchese said the development will be financed in part by his own companies' assets as well two local banks he declined to name.

National City Mayor Nick Inzunza said the project will act as a catalyst for some $1.5 billion worth of redevelopment planned for the city.

"It will provide a lot of housing, it will help to give us a tremendous tax base, and it will bring back an area that has been known as 'the mile of bars ...'" Inzunza said. "These condos will provide housing for future generations and set the standard for future developments in National City."

Inzunza noted that this project will not only be adjacent to city hall and Kimball Park, but also will be near a recently opened library, a new aquatics center and a arts center that is under construction.

Marchese has other projects in the works. On Hancock Street in the Five Points District just west of Old Town, Marchese is planning an 86-unit condominium called Stella. The one- and two-story units will average about 900 square feet and will be priced from the high $300,000s to the low $400,000s. Stella is expected to break ground this November with completion a year later. Fifteen percent of its units will be set aside for lower-income households. The site is currently occupied by a warehouse and a parking lot.

Napoli also helped Marchese find a block at Ash and Columbia streets that will have 98 units in a 28-story tower. That project will be known as Embassy 1414. The units are expected to average about 1,500 square feet,and Embassy 1414 prices are likely will range from the high $700,000s to $3.5 million.

Internationally, Marchese's design firm recently won the competition for the $800 million Batman's Hill Precinct at the Docklands in Melbourne, Australia. This project includes planning for 1,200 apartments and 460,000 square feet of retail space.

Marchese is the developer of 8,000 condominiums around the world.