Rehabilitation has begun on three historic buildings at Liberty Station (the former Naval Training Center) that will become a new medical campus.

The refurbishment of Buildings 6, 7 and 195 will return the structures to medical use. Buildings 6 and 7, built by the U.S. Navy in the early 1920s, served as the medical administration center and eye and dental clinic for recruits at NTC. The Corky McMillin Cos. is the master developer. 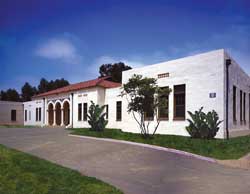 Rehabilitation is now under way on three buildings at Liberty Station, the former Naval Training Center on Point Loma. The renovation includes Buildings 6 (above) and 7, which were built by the U.S. Navy in the early 1920s and served as the Medical Administration Center and Eye and Dental Clinic for recruits (the buildings are connected by a covered breezeway), and Building 195, built during World War II in the early '40s to serve as the Naval Hospital.

Building 195 was constructed during World War II in the early '40s to serve as the Naval Hospital.

After completing Liberty Station's new medical campus, the trio of buildings also will include offices for health care professionals in private practice who serve the general public.

There will also be space available to lease to other small business owners who want a location in an historical building within Liberty Station.

Another building undergoing renovation is Building 83, a three-story, 100,000-square-foot educational structure within Liberty Station's Education District. The historic district will include a total of 60 restored buildings.

Brian Rickling, vice president of Heritage Architecture and Planning whose firm specializes in historic renovation, has been involved in the transformation of NTC since shortly after the base closure was announced in 1997.

"On Building 195, accessibility was an issue where, literally, there was no way to get into the building without going up five or six steps," Rickling explained. "So, we have to add a ramp."

Rickling said removal of hazardous materials and major demolition on the buildings is complete at this point, and some of the rehabilitation work has begun.

Rickling estimated that it will take another two or three years before the project is completed.

Like the medical buildings, the landscaping, trees, flagpoles, ornamental guns mounted in open spaces, and even the 1920s and '40s-style street curbs are all elements of the Historic District that the development team at Liberty Station is trying to preserve.

"In probably less than a year from now, the public will be walking through these historic areas and will still have a sense and a feeling that this was the Naval Training Center and not just a group of buildings that have now been re-used for other things," Rickling said.

A 46-acre regional park that will abut the waterfront and include ballfields and open grass areas is also being constructed on the grounds.

At present, more than 65 percent of that work has been completed.

Major elements include the sellout of all 349 homes being built in three separate neighborhoods.

In the Office District, construction is complete on the 36,000-square-foot third office building and nearing completion on the 53,000-square-foot fourth speculative building. Once completed, the business campus will comprise a total of seven buildings and 380,000 square feet of office space on 22 acres. The initial two buildings are 100 percent leased

A permit to construct 350 rooms in a two-hotel complex has been approved by the San Diego City Council and awaits Coastal Commission approval.

The NTC Redevelopment Project Area is expected to create more than 8,000 permanent jobs, $2.2 million in annual property tax revenue for the city and $875,000 in annual tax revenue set aside for low- and moderate-income housing.

"The city actually gave the land to the Navy in the '20s to build the Naval Training Center," said Rickling, "and now the Navy has given the land back to the city for its citizens to use. It really is a legacy project."

A new 38,600 Class A office building by McMillin Commercial also is being developed at Liberty Station; it is expected to be completed early next year.