A groundbreaking ceremony was held Tuesday for the planned 860,000-square-foot Otay Ranch Town Center project by General Growth Properties (NYSE: GGP) being built just south of the intersection of EastLake and Olympic Parkways in Chula Vista.

As designed by Robert Anderson, a principal with Field Paoli Architects of San Francisco -- who also helped plan the Ralphs store in downtown San Diego -- the two-level development will be divided into four themed areas. 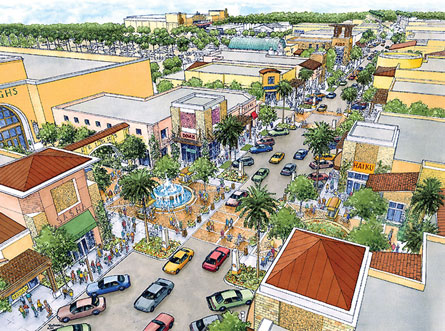 The Garden Court, which will be located on the west side of the development, will feature a broad mix of traditional retailers.

Center Court will include fashion retailers, a food pavilion, a party space, fountains and a fireplace.

The Entertainment Court, located to the east, will incorporate a bookstore, upscale restaurants and a 12-screen AMC Theatre cineplex. The proposed cineplex calls for a 52,000-square-foot theater with stadium seating for more than 2,200 people. The AMC 12-plex will have digital surround sound, an automated box office and AMC's loveseat-style seating.

Lifestyle Row, on the far west side of the property, will feature upscale lifestyle tenants.

Field Paoli previously has designed some large centers, including the 800,000-square-foot Paseo Nuevo Center in Santa Barbara and the 1.5-million-square-foot Victoria Gardens center in Rancho Cucamonga.

Anderson said this center will have its own unique flair that is much more open than a conventional mall.

"This design blends street-oriented retail that is really friendly to pedestrians," Anderson said. "It's important not to forget about the pedestrians."

Kris Longson, General Growth vice president of development, said it is also important to remember where the center is being built.

"California living is relaxed, informal and sophisticated," he said. "Otay Ranch Town Center was designed to suit that lifestyle -- providing casual sophistication for this active community."

For General Growth CEO John Bucksbaum, it was important to design the center differently.

"We had to ask 'how are we going make it special?'" Bucksbaum said. "We have been in this business for 50 years, but we're no longer building large enclosed boxes."

A few months ago, AMC was named as a major anchor tenant, but numerous other tenants have been brought on board as well.

Other tenants include an Aveda salon, a Bath & Body Works and a Nestle Tollhouse CafÈ.

The center will also have numerous stores for children. One of these will be Bear Builder, where guests can choose, stuff, stitch, fluff and dress their very own teddy bear. Another children's store specializing in wooden, old-fashioned, and handmade toys is Geppetto's Toy Store.

Other upscale stores include Coach (NYSE: COH) and Swoozies.

The project also will include six full-service restaurants, a large bookstore and a sporting goods retailer.

If all goes as General Growth officials plan, the new center will be opening on Oct. 27, 2006. Bayley Construction is the general contractor.

General Growth, a Fortune 500 real estate investment trust based in Chicago, is no stranger to San Diego County, having bought the Chula Vista Shopping Center a few years back. That center is anchored by Macy's, Sears and J.C. Penney (NYSE: JCP).

The Otay Ranch Town Center property was acquired by General Growth from a Corky McMillin Cos. entity within the last six months. The brokers included Mike Morris of Morris and Campbell for the seller, and Jon Bilger of CB Richard Ellis for the buyer

One of the nation's largest U.S.-based publicly-traded REITs, General Growth currently has ownership interest and management responsibility for a portfolio of 210 regional shopping malls in 44 states, as well as ownership in planned community developments and commercial office buildings.

Bucksbaum told the Daily Transcript that this was largely due to its acquisition of The Rouse Co. for $12.6 billion.

"Our operating results for the second quarter of 2005 continue to show improvements from the expanded and more valuable platform represented by the combined operations of The Rouse Company and General Growth," reported Bucksbaum. "Although pleased with our progress to date, we continue to expect more benefits and synergies to be realized in the years ahead."