The Fourth Avenue Corporate Center, an eight-level, 91,163-square-foot office building at 1551 Fourth Ave. in downtown San Diego, 92101, has been sold for $18.62 million and will be converted to residential condominiums. 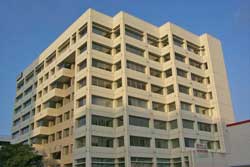 The acquisition was financed with a $31 million construction loan from MacQuarie Bank Limited, an Australian public company. The new ownership said it has bought out a majority of the existing tenants so that the building can be converted to residential condominiums. Skandia Construction has plans to develop additional condos on the same block.

JM 43 purchased the office building in October 2004 for $15.15 million with the intent to relocate its company to the Fourth Avenue location, but instead opted to stay in its current Mission Valley space. The office building was 50 percent leased at the time of the sale. The building was constructed in 1984 on a one-third-acre parcel.

The seller of the property (assessor's parcel 361-261-36) was the Ginsberg Family Partnership with Kenneth A. Ginsberg as general partner individually and as trustee of two trusts.

The two-story, approximately 18,600-square-foot apartment occupies two-thirds of an acre.