The San Diego Chargers football team has a mountain of issues between it and a new stadium on the site of the present facility in Mission Valley: the city's current financial woes, a public vote, an environmental impact report and even an underground gas plume. 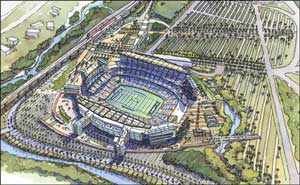 An artist's rendering of the proposed stadium.

Mark Fabiani, special counsel to the president of the Chargers, spoke during an Urban Land Institute meeting at the University Club on Tuesday about his team's dream of building a new $400 million to $500 million stadium, 6,000 mostly multifamily residential units and an undetermined amount of retail, office and hotel space.

The city of San Diego would retain ownership of the new stadium and the land on which the offices, shops and hotel are built. The Chargers would operate the stadium.

The stadium and the rest of this projected $3 billion development would be constructed on about 60 acres, half of which would be dedicated to park land. The 60 acres is part of the 166-acre property currently occupied by Qualcomm Stadium and its parking lot. The city would get to decide what happens to the remaining 106 acres.

One problem is that 166 acres is pledged against the city's pension fund, which is estimated to have a deficit exceeding $1.37 billion.

"The chaos that has enshrouded downtown San Diego has hurt our ability to get a development partner," Fabiani said. "What happens if this property is still on those rolls? What happens if the city goes bankrupt? ... There are so many uncertainties." 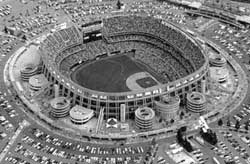 The Chargers hope to get the proposal on the November 2006 ballot, but to do that the team will need to have a proposal in place by Feb. 8. Developers could balk until the process is further along.

"Time is not on our side," Fabiani said, noting that discussions with developers are ongoing. "What we're not willing to do is proceed without a development partner."

Fabiani said he would like to get a developer on board quickly so the particulars in the development plan can gel. "We need input on how the project should look," he said.

Fabiani said the public should know that while 60 acres would be donated to the Chargers and a developer, no further public subsidy would be needed. Fabiani also suggested the city could expect to garner a percentage of the sales tax receipts from retail, as well as a portion of the lease receipts from offices, but that the exact formulas can't be determined until developers are on board. The city also would benefit from transient occupancy tax receipts from the hotel.

Even if voters approve the plan, there still would be other uncertainties. One includes the outcome of a comprehensive environmental impact report (EIR), which takes as long as two years to develop.

Watershed protection for the nearby San Diego River is a concern, and traffic would be a major part of the assessment. Fabiani said circulation around the existing stadium is "a disaster," but the team is committed to spend $175 million on infrastructure improvements to remedy the situation.

"The private sector is going to spend $800 million on this before they see any profit ..." Fabiani said. "If we don't make the traffic work, we can't sell the condominiums."

Along with improvements to the Friars Road/State Route 163 interchanges, part of the northern portion of the development would be built to resemble the same grade as Friars Road. A bridge over the San Diego River, which would link the stadium to Fenton Marketplace and the other shopping areas just west of the stadium, also has been proposed.

Fabiani said his dream is that students living in the new units will be able to take the trolley that now goes to a station underneath San Diego State University.

Meanwhile, another issue that will almost certainly crop up in the EIR is the gas plume that sits beneath Qualcomm and the stadium's parking lot. Fabiani said this doesn't bother him because the parties responsible have pledged to clean up the property. The plume, however, was a major concern during the redevelopment of downtown, but developers found a way to bypass the problem.

Zoning is another consideration. Even with the public's endorsement, Fabiani noted that the city still would have to approve the subdivision of the land, which could be significantly easier if it was given the green light.

Fabiani said the development itself wouldn't be subsidized, which bodes well for the public.

The Phoenix Cardinals, for example, have built a $370 million stadium that is 66 percent publicly financed. Still, the public would have to be willing to donate 60 acres of land worth millions of dollars in the heart of Mission Valley.

There may be many hurdles, but Fabiani emphasized that doing nothing is not an option. Qualcomm, which is nearly 40 years old, has a nearly $50 million tab in deferred maintenance. In addition, it is costing about another $10 million to keep it running, plus $60 million in bond debt from earlier expansions that has yet to be retired -- all this for a facility that is dark 355 days per year.

Fabiani said the Chargers will retire that existing bond debt.

"When you didn't want the ticket guarantee, we got rid of it; when you didn't like the fact that we moved our practice field up to Carson, we moved it back. So we're willing to work with the city," Fabiani said.

But the clock continues to tick, and if Fabiani and his team fails to get a measure on the ballot or to sway voters, the team will have other options as soon as 2007.

Other cities could be solicited if something doesn't happen in San Diego and the Chargers feel compelled to move the team. The city of Anaheim, for example, is seriously exploring building an NFL football complex.

For Fabiani that's no cause for concern.

"But they don't have a football team," he smiled.