The president-elect of the Commercial Realtors' Association of San Diego says he has tallied some 15,000 condominium-conversion units in the pipeline in San Diego alone, not counting those in other county cities.

James Taylor, a Sperry Van Ness senior vice president and CRA San Diego president-elect, said he wasn't sure how many condominium units are being processed in other parts of the county, but that in cities such as El Cajon, where thousands of apartments were constructed in the 1980s, it could be substantial.

"There are 2,213 approved condominium units in El Cajon and a whole lot more are in process there," Taylor said.

Taylor, who recently addressed a RealShare conference at the Estancia Hotel, suggested that part of the problem is that while many of these units weren't built too long ago, other units may be as much as 20 years old and were expected to remain as apartments.

"I have seen the condominium market overbuilt twice before and I have some real concerns about conversions," Kunac said. "There are a lot of these projects on the Eastern Seaboard and they have been slow to move."

Kunac, who once worked for Great American Bank here, also said that too many converters are out there in markets like El Cajon, converting projects that should stay as apartments.

Axel Zikakis, president of Capstone Advisors of San Diego, whose firm has invested hundreds of millions of dollars in condominium conversions, didn't seem too worried, except for certain markets such as El Cajon and University City, where many units are being converted at once. Otherwise, he sees a lot of potential.

"We'll go in as a mezzanine lender. If you do it right and get it to the market quickly, it will work out fine..," Zikakis said. "And if you think we have a lot of conversions here, we are dwarfed by Miami."

And now Florida has come to San Diego.

Jacksonville-based Montecito Property Co. LLC is in the process of converting the 168-unit Terra Vista at Otay Ranch development in Chula Vista, and Edward Chip Conk, Montecito president, said the development's location and its new amenities will be a recipe for success.

"The conversion market has been real strong, new jobs are being created, and there's a huge demand for cheap housing in your market," Conk said, adding that he didn't believe Taylor's 6,000 conversion figure.

When asked how long he thinks it will take his project to sell out, Conk estimated five months, but said it could be faster than that. For example, Conk said his firm sold $120 million worth of condominiums during a single day at a Montecito development in Laguna Niguel a few months ago. "It never takes more than seven months," he said.

Conk likes this area so much that he said he is in escrow on another property he plans to convert in La Jolla. He said that submarket, where the average price of a resold single-family unit is about $1.3 million, cries out for more affordable housing. 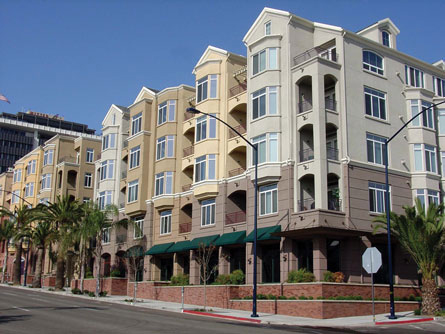 Although officials from Hammer Ventures of San Diego could not be reached for comment Thursday or Friday, the San Diego County Recorder's office showed 36 sales between September 2004 and Oct. 27. Hammer bought the year-old 150-unit Laurel Bay apartment development for $56.6 million in July 2004.

"If they are selling under one a week, that's not good," Taylor said.

The recorder's office also showed 35 sales between May and Oct. 31 at another Hammer conversion, the 225-unit Monarch at Carmel Valley condominium complex. Hammer acquired the apartment complex in the fall of 2004 for $83 million.

Numerous jurisdictions around the country have restrictions on conversions. For example, in San Francisco apartment owners have been barred from converting projects with more than six units, and even then, they must go through a lottery system to be allowed to convert them.