With its 1,600 employees, 155 judges and commissioner referees, 10 locations and a $200 million budget, the oversight of San Diego County Superior Court is a big job, but Judge Janis Sammartino says she's looking forward to the work. 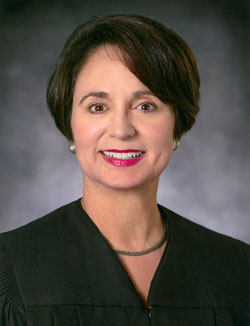 On Jan. 1, Sammartino will take over as presiding judge for a two-year term she hopes will include improving access at the Superior Court and continuing the unification process started in the late 1990s when the courts were put under state control.

"It's a big operation," Sammartino said.

Sammartino, 55, has been on the bench for 11 years and worked in many different facets of the law, overseeing criminal, civil and family cases. Her new job, however, will be largely administrative.

"I do miss cases, I do miss being in the courtroom with trials and I miss not seeing lawyers in the courtroom," she said. "But it's a nice opportunity for me to get to work with the entire bench, which is something you don't get to necessarily do when you're in your courtroom doing cases."

Sammartino will take over for current Presiding Judge John Einhorn, whose two-year term will end in January. For the past two years, Sammartino has been assistant presiding judge, and when she takes over as presiding, Judge Kenneth So will fill her position.

So and Sammartino have been colleagues since they worked in the city attorney's office before becoming judges. He said he was looking forward to taking on his new job in January and had confidence in Sammartino.

"She's a wonderful judge and a great personality," So said. "Her communication skills are excellent. All of the judges feel comfortable with her."

Raised in a military family, Sammartino "grew up all over" but received her high school diploma from Oceanside High School and now lives in Solana Beach. She went to Occidental College in Los Angeles for her undergraduate degree and went to law school at Notre Dame, which she said puts her on edge around this time of year when the Fighting Irish take on USC in football.

In the courtroom, Sammartino said others describe her as "comfortable in court, friendly, but with the formalities being observed," a description she said fit her well.

"I want litigants and lawyers to be prepared," Sammartino said. "Friendly but appropriately formal would be an apt description."

One of her main goals as presiding judge, Sammartino said, is to make the court more accessible to people outside the legal community, particularly those who represent themselves. The court has programs where legal groups and lawyers assist those representing themselves, but Sammartino said she would like to expand those programs.

"We serve the community of over 3 million people here in San Diego and access to our system is of critical importance, especially in areas such as family and domestic violence and in those areas many of the people are self-represented," she said.

"Our system wasn't designed for people who don't have a legal education, so if you're going to choose to represent yourself, for a wide range of reasons that you might do that, I think it provides some challenges for the court to make your appearance in court meaningful and to provide support."

San Diego County Superior Court is also working on a new case management system being developed statewide, intended to make the courts more efficient. San Diego County used to have four municipal courts and one Superior Court, but they were integrated in the late 1990s. Now the entire state is integrating courts and developing computer systems so the entire California legal community can share information.

Judge Einhorn, however, said Sammartino's greatest challenge will be "the continually shrinking judicial dollar and budget that confronts all trial courts in California."

Einhorn said funding was always an obstacle for him, and that trend will continue. He got through tough fiscal times over the past two years by hiring a strong staff and using "the best business practices," he said, and that if Sammartino uses the same strategies she will succeed.

"She has my support and she has the support of the entire bench," he said.

Sammartino was elected to be presiding judge by her peers, which she called "an honor." Her term will be for two years.

After that, Sammartino will go back to being a trial judge.

While San Diego County's presiding judge has a massive job, Sammartino said she loves the law and is looking forward to the work.

"I'm really devoted and committed to this court and to law, so I'm going to enjoy it," she said. "I think if you enjoy and love what you do, the fact that you're working hard and spending a lot of time at it is not a bad thing."