WASHINGTON (AP) -- Construction of new homes and apartments, defying forecasts of a housing slowdown, shot up in January at the fastest pace in more than three decades. 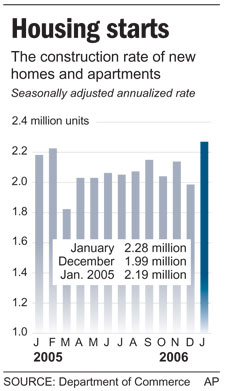 The Commerce Department reported Thursday that building activity was up 14.5 percent last month when compared to December, pushing construction to a seasonally adjusted annual rate of 2.276 million units.

That was the fastest construction rate since March 1973, but it was expected to be a one-time blip caused by unusually warm weather in January that prompted builders to start work on more homes. Analysts are forecasting that housing construction will slow this year as the nation's five-year housing boom quiets down.

In other economic news, the number of Americans filing claims for unemployment benefits rose to 297,000 last week, up 19,000 from the previous week. The increase was larger than economists had been expecting but it still left claims at a level indicating a strong job market.

The 14.5 percent rise in construction activity in January followed a 6.9 percent drop in December. Analysts had been expecting a rebound but the actual rise was far above their forecasts. Still, they are forecasting that construction of new homes and apartments will decline by about 6 percent in 2006 from last year's 2.07 million units.

Permits, considered a good indication of future activity, rose as well in January, climbing 6.8 percent from the December level to an annual rate of 2.217 million units. Applications for building permits had been down 4.1 percent in December.

Sales of both new and existing homes have set records for five consecutive years as unsually low mortgage rates have spurred demand. However, mortgage rates have started rising, reflecting a continued campaign by the Federal Reserve to boost interest rates in an effort to keep inflation pressures from increasing.

Forecasters believe that sales of both new and existing homes will decline slightly this year and prices, which have been surging, will rise but at a slower pace than the double-digit gains seen in much of the country in recent years.

The National Association of Realtors reported Thursday that the slowing in sales that started at the end of 2005 has yet to dampen price gains.

The Realtors found that 72 metropolitan areas around the country reported double-digit gains in median home prices for existing homes sold in the last three months of 2005, compared to the same period in 2004. That was a record level for areas reporting double-digit price increases, besting the old mark of 69. The biggest gain came in the metropolitan area that includes Phoenix, Ariz., where home prices shot up by 48.9 percent.

Some economists have expressed concerns that once home sales start to slide, the big price gains could turn into sharp declines in prices in some areas, bursting the speculative bubble in much the same way that the stock market bubble burst in early 2000, triggering shockwaves that helped to push the country into a recession.

However, new Federal Reserve Chairman Ben Bernanke, testifying to Congress on Wednesday, said he did not expect such a severe impact from the housing slowdown.

"A leveling out or a modest softening of housing activity seems more likely than a sharp contraction," he told members of the House Financial Services Committee.