Phil Baker says 2006 should be an exciting year in technology with new services and hardware coming in the hot areas of computing, entertainment and communications. We'll be able to buy technology with amazing functionality at prices unimaginably low a few years ago.

So with no further ado, here is my annual forecast of what to expect in 2006:

Apple will introduce the most significant new computer platform in years using an Intel processor. That will make their notebooks smaller, lighter, and less expensive and offer longer battery life. It will also run Windows applications. This is the first serious threat to Microsoft since Apple's original Macintosh, although with Apple's five percent market share, Microsoft's domination isn't about to end anytime soon. 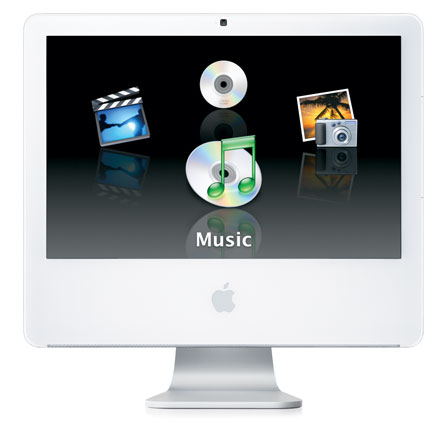 The iMac G5 with computer and display in one. Expect PCs to copy.

Later in 2006, Microsoft will upgrade their Windows XP operating system to Vista. Although long awaited, it will be evolutionary and not revolutionary. Vista will make it easier to find files on our computers, improve security holes, and provide a new look.

Notebook computers now account for more than half of computers sold, and in 2006 they will continue their steady march toward replacing desktops. With LCD displays dropping in cost, and microprocessor pricing wars between AMD and Intel, notebook prices will fall to as low as $400 during the year.

Look for new compact desktop PCs with large flat LCD monitors housing the entire PC, like the iMacG5, for under $800.

We'll also be using more applications online. With a new technology called Ajax, Web pages can be drawn on the screen much more quickly. As a result some on-line applications will work nearly as quickly as those running on your computer. With on-line applications there'll be no need to update your programs, or patch security holes, since you're always using the latest version.

One forerunner in this trend is Yahoo. I've been trying the new beta of Yahoo Mail, a terrific product that rivals the look and speed of Outlook. The advantage is you'll be able to do more from any computer, but the disadvantage is your e-mail may not reside on your computer once you disconnect. Google and Microsoft will both be rolling out Office-like suites that work much the same way.

Unfortunately, unwanted intrusions onto your computer show no sign of abating. Spam, adware and spyware have become worse in 2005 and will get even worse in 2006. Spam now accounts for as much as half of some users' e-mail. As long as there are gullible people clicking and answering medical cure-all ads, sweepstake awards, and Nigerian princes' pleas for money, there's little hope of improvement.

As a result e-mail continues to be less reliable. More and more legitimate mail is getting caught in spam filters. So in 2006 if someone hasn't answered your e-mail: don't assume they're ignoring you! 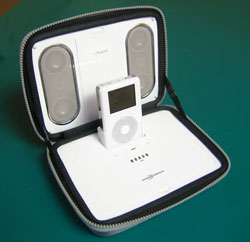 One of the hot new iPod accessories: Sonic Impact's i-fusion portable speakers. iPod and speakers travel in the zip up case.

Mobile entertainment is the watchword for 2006. With nearly half of U.S. households having access to high-speed connections, and 3G being rolled out on cell phones, expect to see video downloads of movies, TV shows, and audio on demand. The new content will be played on iPods, phones, computers, and home appliances anytime and anywhere.

But the combined greed of the cellular and recording industries will make downloading video and music on phones only a modest success. Sprint recently introduced a music downloading service, offering songs at $2.49, two and half times the cost of iTunes. I expect this to be an embarrassing failure until they cut the cost in half.

In parallel, the music industry will continue fighting the digital distribution of music, but with reduced effectiveness. Sony's bungled efforts to spy on their customers' computers when playing their CDs has backfired and tarnished the entire industry and its attempts to impose their DRM (digital rights management) technology on us.

Sony will continue to be shunned and ridiculed by the high tech community, and will be the subject of numerous lawsuits. As a result we'll now be wary of putting any audio CD in our computer, driving more people to use downloading and illegal file sharing that the music business is fighting. And the recording industry also faces a new threat: new portable satellite radios from XM and Sirius that let users record, save, delete and organize their favorite music from the hundreds of channels.

In the hardware category, iPod's domination of music and video players will continue to grow. There are now close to 4,000 accessories that have created an entire iPod economy. And it's not just a U.S. phenomenon. I just passed through the Hong Kong airport and saw the electronic stores lined with iPod speakers, earphones, and cases. The latest version of the iPod that plays video with its cell phone-sized screen would have been considered a joke if anyone else introduced a screen so small, yet right now Apple can do no wrong. So expect a new iPod with a larger screen.

Apple's dominance isn't just linked to its hardware. Apple has become the seventh largest music retailer in the U.S.; the other six are all bricks and mortar chains like Wal-Mart and BestBuy. In addition, podcasting took off this past year letting anyone create his own audio content and distribute it over iTunes. This year we'll see podcast and video-cast usage explode, but the challenge will be finding the good content.

Along with Microsoft, Apple is making a huge effort develop an entertainment hub for our living room. While Microsoft has had little success with their Media Center PCs, a computer for the living room, Apple will be more successful with their tiny Mac Mini-like box with a remote control. It's positioned as your living room command center and aimed at iPod users. It will have an iPod dock for uploading and playing content, will record TV programs like a TiVo, back up your music and photos from your computer, and bring them to your living room's TV and sound system.

On the subject of home entertainment, I expect flat panel TV prices will continue to drop in price. Expect basic 42-inch flat panel TVs at $1,000 and HDTV versions for $1,500 before the end of 2006. 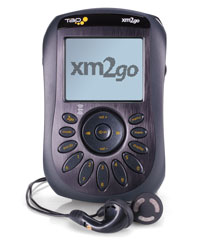 Satellite radio - the next big thing for music lovers

I'd love to think cellular voice service will improve, but 2005 has not provided much hope. Recent surveys show cellular service garners far lower customer approval than most other services.

We'll see several new virtual cellular companies, brands that buy and resell capacity from the major networks like Verizon and Sprint. They'll be theme-based, focusing on such things as entertainment and sports.

Our next cell phone will be 3G-enabled allowing us to access the web and retrieve e-mail at 10 times the normal speed. Look for many clones of Motorola's thin RAZR phone. And expect an innovative phone service offered by a company not now in the phone business that will offer us free calling -- provided we listen to ads.

We'll see the first mobile phones that combine cellular and Wi-Fi, giving us a choice of networks. Built-in VOIP will allow free calls over WiFi networks. There'll be phones with built-in hard drives and 5-megapixel cameras with optical zoom lenses. But the big problem with using the phone for music and video will be battery life. Few phones today have long enough battery life to get through a couple of days of just voice service.

Sprint and Verizon will continue to expand their high speed EVDO data networks, as Cingular rolls out its HSDPA network with average speeds between 400 and 700 kilobits per second, and usable worldwide. As WiFi becomes more widespread expect this service to drop to less than $50 a month.

With the convergence of all of this computing, wireless and entertainment we'll see lots of new hardware with faster connectivity, more storage, and better screens. But there still won't be a single device. We'll still be carrying two or three devices to satisfy our needs.

So that's what 2006 looks like from a technological point of view. Of course there will be surprises along the way -- both good and bad. Who would have predicted that Sony, the most famous consumer electronics company in the world, would be displaced by Apple Computer? Or that Google's stock would hit 430? So stayed tuned to this column in the New Year for all the essential personal technology developments. But for now, I'd like to wish all of you a joyful and peaceful Christmas or Chanukah.

Baker has developed and marketed consumer and computer products for Polaroid, Apple, Seiko and others. He is the holder of 30 patents and was named San Diego's Ernst & Young Consumer Products Entrepreneur of the Year in 2000. Send comments to phil.baker@sddt.com. Comments may be published as Letters to the Editor.