The HUBZone program, established in 1997, provides contracting assistance to small businesses located in economically distressed communities, referred to as historically underutilized business zones or HUBZones, to promote job growth, capital investment and economic development in these areas, including Indian reservations.

For a small business to be HUBZone-certified, its principal office must be located in a HUBZone and at least 35 percent of its employees must reside in one of these specially designated areas, based on census tracts defined by the U.S. Department of Housing & Urban Development. Also, the company must be owned and controlled by U.S. citizens, a community development company or an Indian tribe. As long as the small business continues to meet the eligibility requirements for the HUBZone program, it can enjoy uninterrupted participation in the HUBZone program.

The program’s benefits for HUBZone-certified companies include competitive and sole source contracting and subcontracting opportunities and a 10 percent price-evaluation preference from government agencies that purchase goods and services from HUBZone firms. The federal government has set a goal of delivering 3 percent of all federal prime contracts.

The program uses the Internet to provide service to small businesses and has been extremely successful because of its availability online. Small businesses can research their location via the Internet to determine if they are located in a HUBZone census tract. If they are, they can apply for HUBZone certification online using the Web-based application and usually receive a determination within 30 days.

The online application features a streamlined presentation with pop-up menus directing applicants to an online guide to the federal regulations. The system also allows applicants to check the status of an application at any time during the review process.

The SBA presently has more than 12,000 HUBZone-certified firms in the program with a portfolio of businesses. These firms employ more than 177,000 people with a total average of annual receipts of $22 billion and more than 115,000 of these employees live in a HUBZone. Although it is not a requirement, many HUBZone firms are minority-owned, woman-owned, veteran and service disabled veteran-owned businesses and 8(a) firms.

Approximately 13,500 locations nationwide have been certified as HUBZones. They include geographical areas such as the “non-metropolitan county,” which are counties with either a median household income of less than 80 percent of the state median household income or an unemployment rate of more than 140 percent of the state-wide average. They can also include areas within the boundaries of federally recognized Native American lands known as “Indian Country,” and closed military bases.

Small businesses interested in learning more about the HUBZone program and applying for the program can visit the Web site at www.sba.gov/hubzone. The online application can also be accessed from this site.

Carlsbad resident Joan Colvin was no different than a lot of inventors and entrepreneur types. She had what she thought was a winning product idea but wasn’t sure what to do with it or how to get started licensing, manufacturing, marketing, distributing and ultimately profiting from it. 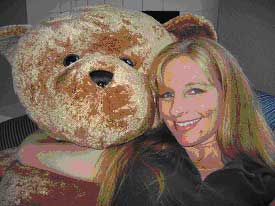 Joan Colvin and a Character Bear.

The product concept evolved from an activity she planned for guests attending her daughter’s fifth birthday party. The children stuffed small pillows labeled with positive character traits like responsibility, friendship, fairness, honesty and courage into empty teddy bears, bringing the bears to life in their imaginations. The activity provided a fun and imaginative way to teach character traits to children and prompted healthy discussion between parent and child about the value and importance of these traits.

"I had so many ideas and found myself in new territory," said Colvin, a busy wife, business owner and mother of two young children ages 7 and 4. "I knew I needed help, but didn’t know where to turn. That’s when my good friend and old boss recommended SCORE. They have many different counselors, both active and retired, who have varied backgrounds along with the business experience I needed to learn from."

So Colvin began signing up for and attending SCORE’s low-cost, educational workshops on business-related topics. Colvin also took full advantage of SCORE’s unlimited, personalized business counseling, offered free to members either online, at their own place of business, or at SCORE chapter offices and business centers throughout the county.

Two years after it was established, Colvin’s new business is thriving. The first edition of Character Bear is out on the market and is currently on sale at Legoland, specialty toy stores like Learning Express and Thinker Things, as well as online through eBay and Colvin’s own Web site (www.characterbear.com). She is currently in negotiations to take the initial product concept into a licensed property with another company founded by Tom Wilson, who is better known for drawing the famous Ziggy cartoon.