By DOROTHY O'DONNELL, Special to The Daily Transcript
Friday, September 28, 2007

As a graduate student earning his MBA at New York’s Columbia University in the late 1990s, Croutons Restaurant co-founder James Watts was unimpressed with the lunch choices on campus. His quest for a fresh, quick and tasty meal led him to a bakery on Broadway that offered a unique and satisfying alternative to standard fast-food fare.

“Every day at lunch time, employees would wheel out carts with two types of fresh lettuce, toppings, a couple of kinds of meat and dressings,” said Watts, who, upon talking to the bakery owner, learned he made more money in those two hours than he did the rest of the day. “Customers could order fresh-made salads and the line was always out the door.”

Watts originally planned to pursue a career in banking. But through internships, he realized the world of corporate finance wasn't for him. Nor did he wish to dive into the dot.com arena that was then in full frenzy. 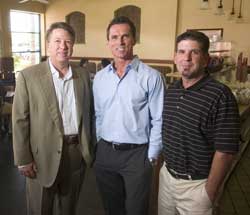 “I wanted to do something on my own, something that would be in the customer’s face and make a true difference, ” he explained.

Watts returned to his native San Diego in 2001 with the seed of an idea for a casual yet high-quality lunch restaurant inspired by the fresh salads he'd enjoyed at that New York bakery planted in his mind. Together, he and his childhood friend and Croutons co-founder Frank Farella refined the concept and began taking steps toward making their vision a reality.

According to Watts, the pair spent six months visiting “almost every restaurant between San Diego and Beverly Hills,” collecting menus, trying to get a feel for what would appeal to customers and picking the brains of people in the industry.

The partners opened their first Croutons in a Carlsbad business park in 2003 using Farella’s home as collateral to secure a loan. Specializing in a simple menu of made-to-order salads, homemade soups, paninis and trademarked flatbread sandwiches called flatinis®, Croutons has made using only the best quality, freshest ingredients its top priority since day one. Though they received plenty of advice to gradually replace more costly premium ingredients with cheaper substitutions, they were determined not to compromise their product.

“We put more focus on developing a menu to drive customers in the door than on food costs and margins,” Watts explained. “ Our goal was not to do what so many other restaurants have done -- start up with one thing and whittling it away until you're doing the same thing as hundreds of other companies. We wanted to ‘wow’ the customer and create a buzz about what we were doing. As long as you have enough customers coming in, you can make up for slightly higher food costs with volume.”

Their approach paid off and Croutons was an instant hit. It not only appealed to the underserved market of white-collar professionals -- particularly women -- that the partners identified in their research, but also to college students and other lower-income customers.

“People are willing to pay for a lunch-time meal that delivers the same level of quality they’d expect from a dinner restaurant,” Watts said.

Today, Croutons has another location in La Jolla Village Square and about 40 employees in San Diego. The company’s revenues for 2006 were $1.375 million. There is also a separately-owned Crouton franchise in Bend, Ore. that is doing well.

A fourth Croutons will open in Sorrento Valley next month and another is slated to open in the new Student Services building on the UCSD campus in February of next year. Watts is particularly proud of the future UCSD Croutons as student demand played a big role in it being selected from among dozens of competitors for the prime location.

“There was a three-month survey on campus asking students what type of food they'd like and specifically what operator in that category they'd most like to see in the building” said Watts, who got a call from UCSD’s Vice Chancellor of Student Affairs Gary Radcliffe. “He said ‘I don't know you guys, but I'm going to have to do some research because you came out on top in our survey.’”

Given their success, Watts was confident he would have no problem securing a loan to finance building and opening the two new locations. But he and Farella were turned down by almost every bank in town. Even the big bank where they were already customers — though not entirely happy ones — refused to help them.

Only California Bank & Trust came through by granting the entrepreneurs an SBA 7(a) loan for expansion.

Ray Weamer, Vice President of California Bank & Trust’s Community Development Division, was impressed with Croutons and said that it’s the kind of business the bank wants to be associated with.

“Croutons is a good emerging restaurant with great quality food that we're glad to help grow,” he remarked. “As a preferred SBA lender, we can do all types of SBA loans. We're one of the biggest SBA lenders, and while there are others out there, some are pulling out of the market given everything that’s happening in the lending world right now.”