By PADMA NAGAPPAN, Special to The Daily Transcript
Friday, September 26, 2008

Ed Fitch began Cactus Recycling, a one-stop, full -ervice industrial and commercial recycling business, 17 years ago in San Diego. The original location was on Cactus Road, which is how the name was derived.

Since then, he has grown the business and expanded it to Los Angeles and Tijuana. Cactus employs 180 people in these three locations.

Clients include Sony and Qualcomm. Cactus designs custom recycling programs for its clients and provides the equipment, the labor and the documentation. It takes pride in being their recycling partner, working towards its mission of maximizing recycling and minimizing waste.

“We do a lot of work for the maquiladora industry and we work with many of the largest multi-national companies in the industry,” Fitch said.

The company was forced to move from its original facility, when the 905 freeway expansion plans were put in place three years ago. Fitch explained that relocating a heavy duty recycling facility is not easy.

The Cactus road location comprised over 6 acres and he needed a comparably sized facility with offices, yard space and a warehouse. The new location also had to have the proper zoning that was required. 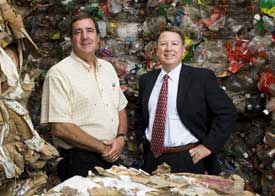 “We needed to transition quickly so we did not lose customers. We located a good property but it was not for sale. The owners wanted to lease it and develop it on their own,” said Fitch, who then settled for unusual terms with the owners.

He took a 5 year lease and since Cactus’ usage needs were unique in terms of power and concrete, he invested $1 million in improvements to the property. He opened escrow with a time frame of one to 5 years, eventually closing in two years time.

“We needed a bank which offered creative financing, since we were entering a non-traditional transaction. The seller recommended California Bank & Trust,” said Fitch, who added, “CBT helped finance the property, obtain SBA financing and worked hand in hand with us.”

Bob Whitelaw, the El Cajon branch manager of California Bank & Trust explained that Fitch had put in an enormous amount of time and money into the new location as well as the transfer and that once he got settled in, he was able to focus on his business.

“Other banks weren’t willing to look beyond Fitch’s current situation to see what was coming,” said Whitelaw, who explained, “We went the extra mile. We’re not a ‘box’ lender, we look at each business on a case by case basis.”

“I think it was a deal that required some solid SBA expertise in terms of underwriting the transaction. We partnered with Resource Capital, a non-profit community development corporation,” said Ray Weamer, Senior Vice President at California Bank & Trust.

The journey to obtaining a loan is a maze riddled with obstacles, according to Weamer, who said that his bank helped Cactus navigate through this maze. “Some lenders got to second base and stalled on the deal but we kept the long term in mind. We helped him get it done because his story made sense to us.”

While other lenders are pulling in their horns or eliminating SBA lending altogether, California Bank is still doing a lot of SBA loans, Weamer said. “Ed has a good head on his shoulders. The worse the economy does, the better the recycling industry does.”

For information on California Bank & Trust’s SBA loan program and other business services, contact Ray Weamer at 858-623-3632 or raymond.weamer@calbt.com.