Some at CCDC dislike Manchester's switch in density after agreement

By THOR KAMBAN BIBERMAN, The Daily Transcript
Friday, May 26, 2006

Manchester Financial Group's first plan for the Broadway Complex site on downtown San Diego's bayfront raised concerns about walling off the waterfront. Now the oft-controversial developer has revised that plan, making it even denser.

The project will be built on a 14.72-acre property near the foot of Broadway where the Navy has occupied buildings, which date back to the 1920s. In March, the Navy awarded Manchester Financial an exclusive negotiating agreement to develop the site. Last Wednesday the board of the Centre City Development Corp. was presented with a revised plan that, while more dense, is still within the parameters of a 1992 plan.

Under that plan -- a development agreement between the Navy and the city of San Diego, and reaffirmed with the city in 2003 -- Manchester and the Navy would be permitted to build 3.2 million square feet of mixed-use development. 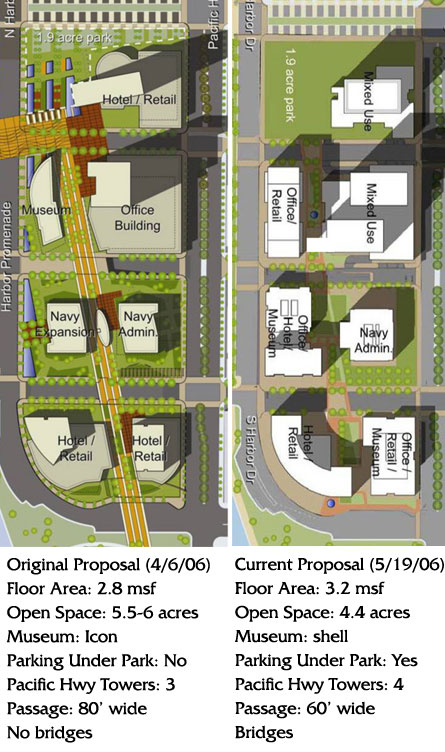 While this is the allowable maximum under the 1992 plan, Manchester's March 2006 submission was for 2.8 million square feet.

Using the 1992 density, Manchester has reduced the amount of open space from six acres to four; a 13-story mixed-use tower with office and retail space has supplanted a museum; and a north-south pedestrian promenade has been narrowed from a minimum width of 80 feet to 60 feet.

"Several board members expressed concerns relative to the changes made from the initial proposal, which increase the intensity of commercial uses throughout the project," CCDC writes.

Fred Maas, CCDC board member and president and CEO of Black Mountain Ranch LLC, argued that by offering a less dense plan first and then a denser one later amounted to "a bait and switch."

"I am concerned primarily about pedestrian access and the walling off of the waterfront," Maas said. "... We are honor-bound and legally bound to this plan, and I was pleasantly surprised when we saw the first one. But now I fear we may be departing from the land-use guidelines that led to their successful bid."

Most of the criticisms leveled last week involved the immensity of the project, and the view corridors, which critics say are rapidly disappearing along the San Diego Bay.

Many elements of the project will remain the same. Manchester still has to develop a minimum of 327,000 gross square feet of government administrative space plus associated parking and support infrastructure on a portion of the Broadway Complex site.

The developer is also still planning a major hotel component with at least several hundred rooms, but some board members are upset by the changes.

CCDC board member Wayne Raffesberger, who expressed concerns about the project during last Wednesday's meeting, said he thought the initial design was a good first step, but that the second plan went in the opposite direction.

"I expressed my disappointment. I thought the first plan was good. It could have been more green, but this ... plan is more dense, more view blocking, and there are buildings with massive podiums that go right out to the curb," Raffesberger said.

Raffesberger also said he wasn't particularly happy with Gensler's design for the 327,000-square-foot office building Manchester would build for the Navy. He was quick to add that he liked the setbacks for that part of the plan, however. "I like that footprint. It doesn't block views at all," he noted.

Raffesberger said the pedestrian promenade was too narrow, but Perry Dealy, Manchester president, said even with the cutbacks, there is still plenty of open space in the plan.

"There's a huge amount of open space," Dealy said, emphasizing that the project is still within the parameters of the community plan.

Dealy also said that although some are concerned about view corridors, they will still be viable along E, F and G streets.

Dealy said most of the increase in density was the developer was unaware that about 300,000 square feet of the parking would be allowed above ground when Manchester originally bid the project.

"We were not allowed to talk to CCDC during the selection process, so we didn't know," he said.

Dealy said the increase in density and other changes were practical matters that, while not popular with some, make the project more viable.

"Functionally we wanted to adjust the design of the buildings. Now, we're having to make it work. Our intent is not to do something outside of the development agreement," Dealy said. "We want to do a conforming plan, and the Navy wants to see a successful project."

Navy Region Southwest spokesman Scott Sutherland said his agency believes this is what it wants as well, and seemed satisfied about what it had seen from Manchester thus far.

"The Navy is committed to the tenets and criteria of the development agreement we have signed with the city," Sutherland said. "Additionally, we remain committed to a close cooperation with the city and will remain engaged both with the Manchester group and CCDC as they work through the details and issues... ."

The next workshop on the Broadway Complex property is scheduled for June 3 at the Community Concourse.

The negotiations between Manchester and the Navy will continue over the next several months, and if any substantial wrinkles due occur, there isn't a lot of time to iron them out. The Navy must name the developer must by he end of the year, or the site could be lost in a base realignment and closure process.

Respond: Should the Broadway Complex include more open space? Send your thoughts to soundingboard@sddt.com