By JERAN WITTENSTEIN, The Daily Transcript
Wednesday, May 31, 2006

Scripps Health announced Wednesday plans to build a comprehensive cardiovascular institute as part of the first phase of the replacement of Scripps Memorial Hospital La Jolla. 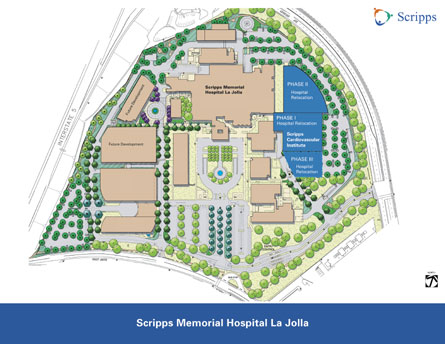 ENLARGE: See a larger version of the map

The institute will combine the cardiac programs of Scripps Clinic/Scripps Green Hospital and Scripps La Jolla.

“Our vision is to build the world’s best cardiovascular institute,” said Dr. Paul Teirstein, M.D., chief of cardiology and director of interventional cardiology at Scripps Clinic/Scripps Green Hospital, to a crowd of media and supporters gathered on the hospital’s courtyard lawn.

“This is a historic announcement, not just for Scripps, but for the entire San Diego region,” said Chris Van Gorder, president and chief executive officer of Scripps Health.

“Today, I’m happy to announce that we’re bringing two of these cardiovascular programs together to create San Diego’s largest, most comprehensive, cardiovascular center.”

The creation of the Scripps Cardiovascular Institute is the first phase in a three-phase reconstruction and relocation of Scripps Memorial Hospital La Jolla that will update the hospital to meet state seismic standards as well as community need. The initial cost estimate for the cardiovascular institute building is more than $360 million, according to Scripps.

“At Scripps Clinic today we treat patients who come from all over the world for some aspects of their cardiology care,” said Teirstein. “But what we need to do is create a destination cardiovascular center that is dominant and world renowned and world-class in every aspect.”

In order to achieve that goal, Teirstein said Scripps will need the latest and most advanced technology, major funding for medical research and physician education -- in particular, the graduate medical education program.

The graduate medical education program "is what carries on our tradition and this is what’s going to ensure that San Diego trains its next generation of physicians.”

Financing for the Scripps cardiovascular institute will come from operating revenues, loans and community support, according to Van Gorder.

“If our vision for the Scripps cardiovascular institute is to become a reality, we will need the community’s help and support,” he said. Van Gorder also said he was confident that the community would respond.

Scripps estimates the cardiovascular institute would be complete in five to seven years, according to Don Stanziano, director of public relations.