Paul Brown is constantly on the move as president of the public services group for Camp Dresser and McKee Inc., and as such responsible for the firm's North American public projects. New York, Denver and Cambridge, Mass., are just a few of the cities Brown finds himself in on a regular basis.

This means that he is working on projects for the Denver-based Colorado Water Conservation board, the New York City Department of Environmental Protection, as well as local projects for the Metropolitan Water District of Southern California. According to Brown, he could do his job from anywhere in the United States, yet he chooses to stay in San Diego where he has lived for approximately 15 years and work out of the company's Carlsbad office. 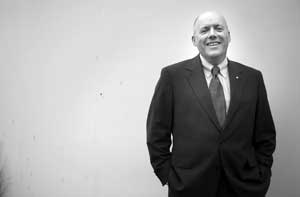 "It's too nice not to live here," says the 30-year CDM employee with a smile.

The travel might get to him if he wasn't so passionate about the consulting, engineering, construction and operation of environmental services projects that his firm has handled for 60 years. Brown's eyes light up and his words sometimes flow in bursts and trickles as he endeavors to relay his enthusiasm for his job.

According to Brown, CDM has traditionally provided environmental engineering services to public utilities and private companies when they needed expertise on a specific project. The firm is currently operating in this capacity for the city of San Diego with its Miramar Water Treatment Plant in Scripps Ranch. The firm was hired as an engineer to plan and design the plant.

"Paul's a wonderful person to work with," said Marsi Steirer, deputy director of the city of San Diego's Water Department.

"I think (CDM) is a very good engineering firm and they emphasize working hard for the customer as well as the value for the product."

Beginning approximately 20 years ago, the firm began bundling services together that had traditionally been conducted by separate businesses. For example, rather than simply providing the plans and specifications for a particular project, CDM began assuming the task of construction as well as, sometimes, the operation of facilities.

"Instead of a separate company doing the drawings and one doing construction, one company is hired to both design and construct it in one contract. And when we saw the industry moving in that direction ... we added the construction capability," said Brown.

By bundling the services, the firm is able to sidestep the "adversarial" design-build bid approach in which the company works with a separate builder, according to Brown. By doing this, the firm is able to increase both time efficiency and bottom-line costs by making it a team operation. CDM is currently working on such a project: a 5 million gallon per day treated wastewater plant at Camp Pendleton.

With over 100 offices internationally, CDM generated $687 million in revenues for 2005, an 11 percent increase over 2004's $622 million. Although Brown says most of the employee-owned firm's projects are still traditional -- planning and designing -- he estimates that a little less than $200 million of the firm's 2005 revenues were generated from construction. Brown said design, build, operate projects account from an even smaller portion of this figure, although it is on the rise.

In the San Diego area, Camp Dresser and McKee faces competition from URS Corp., Project Design Consultants, MWH Americas Inc. and PBS&J, to name a few of the local offices that serve the area.

Water projects account for the largest portion of CDM's business, but the firm also handles all kinds of urban infrastructure, including projects like transportation and aviation, according to Brown. He sees water as an increasingly central element in the redevelopment of cities, especially downtown San Diego.

One of the biggest challenges the firm faces, according to Brown, is enabling its employees with diverse specialties to work together on projects. The projects the firm undertakes are often so broad that they involve a combination of both structural improvements and restoring natural systems.

"So if what the world needs are these more integrated projects ... we've got to get these groups working together and that's where we spend a lot of time."

In response, CDM has developed a "virtual" online organization geared toward the career development of these diverse employees as well as building an integration of ideas and smoother working relationships. The organization offers informational materials, conference materials, and also provides a forum for research on how to work better on interdisciplinary projects. Camp Dresser and McKee also has its own accredited internal university (CDMU).

Another problem the firm is facing, which according to Brown is an industry-wide problem: There are not enough engineers.

"That is our biggest problem right now," he said. "We have literally hundreds of openings around the country."

"I think in our industry we may have suffered a little from the extraordinary interest that people had going into computer information technology, people that might have otherwise been more interested in civil engineering."

What is the firm doing? "Anything you can think of, we will try to do" to recruit people, Brown said. From increasing bonuses to making connections with engineering departments in schools across the country, CDM is actively pursuing new engineers on a nationwide scale. The firm even supports engineering programs at the high school level, according to Brown.

"That's part of our general interest in trying to get more young people going down that path."