In the San Diego commercial real estate arena, ECP Commercial has found its home serving the middle ground: the everyday citizen interested in getting into property investment.

"We're not John Burnham and we're not CB Richard Ellis. We have a very unique and eclectic group of clients, who are, for the most part, individuals who, for one reason or another ended up in commercial real estate," said president and CEO Robert Phillips. 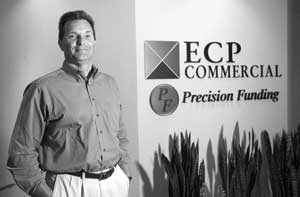 The big guns of commercial real estate don't intimidate Phillips, who has garnered a specific clientele whose interests go beyond choosing the top firms.

"We have people who own one property, a 5,000-square-foot little retail center. We have families that own large number of properties. We have several very large clients, and a lot of smaller clients," he said.

In 1995, East County Properties merged with East County Property Management to create Excellence in Commercial Properties, a convenient name change that both kept the familiar acronym and reflected the company's expansion beyond East County and throughout the state. At that point, ECP managed 18 to 20 properties and approximately 800,000 square feet. Today, the self-described "asset manager" manages more than 90 accounts, equaling roughly 4 million square feet, from Otay Mesa to Sorrento Valley, and in Bakersfield, Orange County and Yuma, Ariz.

Despite its ability to branch out, the firm's roots are still undeniably in East County. Its top sales in 2005 were the Santee Medical Center in Santee, $3.9 million; a retail shopping center in Lemon Grove, $3.7 million; and vacant land on Buena Vista Street in Santee, $1.4 million.

Phillips came to work in commercial property management at the age of 16 as a protégé of Roy Carlson, then-owner of RC Management and Phillips' big brother in the Big Brothers/Big Sisters program. After various general labor jobs for Carlson's properties throughout high school, Phillips joined RC Management upon graduation and stayed until he was 21, at which point he was "kicked out of the nest," said Carlson.

"Robert took ECP from a very small operation to one that is quite significant now," said Carlson.

Word-of-mouth has been so effective that the company no longer relies on advertising to pull in clients, according to Phillips. The company currently spends "close to zero" on ads to promote ECP Commercial, compared to the $10,000 to $15,000 advertising budget of past years.

"What we found is, it didn't work for us, and we were able to grow our business at a level that was everything we could handle without (heavy advertising)," he explained.

While the words "condo conversions" get dropped in the real estate market and media regularly, it's usually referring to residential condos. ECP has been bringing the concept to industrial and commercial units, giving business owners, like homeowners, an opportunity to own a space for an affordable price.

"Some of these tenants have been leasing for 15, 20 years, paying rent year in, year out, watching their rents go up, go up, go up," he said. "They're going to be able to go in and purchase one of these condominiums at a fairly reasonable price and fix their rental costs."

ECP will broker sales and manage the property for the first two converted industrial condos in East County: Cuyamaca Commerce Center in El Cajon and Venture Business Park in Santee, both purchased in February.

The 56-unit Cuyamaca building will most likely be used for manufacturing and commercial showcasing, as its location on Cuyamaca Avenue provides much-sought visibility.

The Venture Business Park, with 27 suites, will provide easy freeway access to owners, making light industrial the most appropriate use for the space.

"We think it's a great concept for both users and the community in the ability to fix occupancy costs and have more certainty in business," echoed David Gatzke, senior vice president of Jackson Pendo Development, renovator for both projects.

As Otay Mesa, one of San Diego's fastest-growing areas, begins to develop heavily, residential and mixed-use development creeps over the hills of neighboring Chula Vista and other communities. This, to Phillips, is a plus to commercial development and property management.

"All of that's a really positive thing," he said. "There was a hesitance from the national tenants. It's like everyone is waiting for somebody else to do it. It was that lack of residential that I think was keeping everybody hands off."

Phillips added, however, that "we don't actively go into areas and say 'hey, that would be a great piece of land to develop.'"

One of ECP's greatest assets, according to Phillips, is its staff, a relatively young group with most brokers in their mid- to late-20s.

"These people are coming in here and getting an education from some really seasoned individuals," said Phillips. "To me that's phenomenal."