Whether a case of right place at the right time or building industry foresight combined with inside connections, Douglas Barnhart's business decisions have made his name synonymous with educational construction in San Diego County.

Today Barnhart is CEO of Barnhart Inc., which currently has at least 11 high-profile educational projects under construction in San Diego, and since 1996 has been ranked as the largest privately-owned commercial building firm in the county by The Daily Transcript.

"We're damn good at it (educational and other commercial building)," Barnhart said.

CEO of Barnhart since 1983, his beginnings in the construction industry came as the Navy Civil Engineer Corps officer responsible for all construction projects ongoing at San Diego naval sites. But Barnhart was presented with a dilemma: pursue a career with the Navy -- meaning separation from his wife and two children -- or stay in San Diego.

He chose the latter and joined up with San Diego-based C.E. Wylie Construction Co., where he would work for eight years honing his negotiation and construction project management skills before starting Barnhart during a period of economic stress.

"A lot of people told me 'that's a terrible time to launch a construction company,'" he said, referencing 1983's inflation and high interest rates. 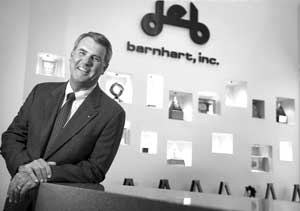 But, his initial strategy for success weighed heavily on his ability to contract with the Navy and his past reputation.

"My bet was trade contractors would bid projects for me and would almost give me projects based on my personal reputation," he said. "That in fact proved to be true."

Then in the mid-1980s Barnhart decided that there was not enough work in the military and naval sector to sustain the company and turned to the education sector.

"I'm not sure what was going through my mind at that point in time," he said. "I didn't realize what a huge market the education market was going to become."

Soon after, the company would have a portfolio of six or seven education projects within the county before other construction companies awoke to the upcoming market. Educational projects would then lead into further market expansion in the sports and public facilities sector. Of the sports projects, the company's work constructing Charger Park, the Charger's training facility, and joint venturing to build Petco Park stand out as notable projects.

"It's (Lincoln) the crown jewel of the Proposition MM program," he said, commenting that the company has created work opportunities for people that live in the area as well as Lincoln alumni.

Now known for its projects on a state and nationwide level, the company has branch offices in Stockton, Oxnard, Palm Desert, Riverside and Tustin. Barnhart himself has also built an out-of-state reputation, by serving two terms as president of the San Diego Associated General Contractors (AGC), currently serving as a national board member and vice president for AGC of America and in 2008 serving as president of the national AGC. All of these give him insight on construction industry issues. One such issue is the industry losing its potential workforce, which is graduating from universities and K-12 schools to other industries. "That is a huge industry problem," he said, adding the industry is suffering from a huge deficiency in onsite builders, superintendents and foremen. He said the industry shares a lot of responsibility for this, as it hasn't done a good job of image building.

For developers and contractors, one key to moving forward is the understanding that the market has changed, which will affect the workforce and costs of materials

"A global economy is just not in auto dealers. It's impacting this industry and will impact it more in the future," he commented.

Another upcoming issue for the industry is the California Air Resources board's proposed diesel emission regulations, which Barnhart believes are well-intentioned but will negatively impact small family-owned construction companies as the cost to retrofit or replace a piece of construction equipment may be too much burden financially.

Taking a look at the future of Barnhart, he said the company is eyeing some hospital and medical facility projects.

"There is a good market there and I think it will get stronger," he said, insisting the company will stay away from condominium projects, as under the current system of laws it is still unfavorable to build such product.

As for Barnhart, the love of building still smolders, as he enjoys the satisfaction of seeing a finished project and the reaction of those who will benefit from it.

"The ultimate finished product is bigger than all of us," he said.