Standing proudly amidst a jungle of wires, concrete and twisted metal, shouting over the roaring buzz of power tools and the blaring tunes of a local radio station, hotel owner Judi Winslow inserts a keycard into a fine Asian hardwood door and turns the handle. 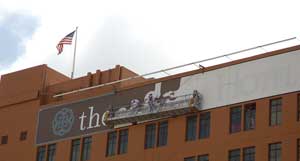 Behind the door is gentrification at work -- a $16 million investment, years of planning and the will to make what was old, new again. Behind Winslow are men at work – gutting, cutting and rebuilding one of San Diego’s oldest, and in recent memory, one of its least desirable hotels.

Winslow knows the criticisms of the hotel that she and her husband have owned and operated for the last 20 years. She’s read the reviews that litter the Internet that say things like: “Don’t stay here if you value your life,” “One night was more than enough,” and “I want my money back”.

But that was the Pickwick Hotel. And, as Winslow sums up the transformation: “It’s the Sofia now.”

And although the grand reopening of the 80-year-old hotel is not expected until December, the building is rapidly assuming its new identity.

Walk down Front Street and right before hitting Broadway, look up. Workers are already plastering the hotel’s new logo on the brownish red bricks that remind San Diegans and tourists alike that this building is from a far different era than the one in which we live.

In 1926, when the Pickwick Corp. built the hotel, it served as the premier accommodation Downtown. Travelers rolled through Pickwick’s bus station and found comfy, upscale lodging the moment they stepped onto the city’s developing streets. The only hotel in San Diego with “en suite” bathrooms, the management’s marketing campaign quickly became “A room and a bath for two and a half.” Things were good for the Pickwick, and for Downtown San Diego.

But in the late 1950s, growth slowed in the bustling metropolis and the Pickwick began to show signs of aging. For the next 50 years, as the travel industry began to branch into nearby communities and airplanes took precedence over buses, the downtown hotel hit a downward spiral that led to the current redevelopment.

“As downtown goes, so the hotels go in San Diego,” Winslow said. Then, gesturing with her thumb pointed to the sky she added: “As downtown comes back up,” so does the Pickwick. 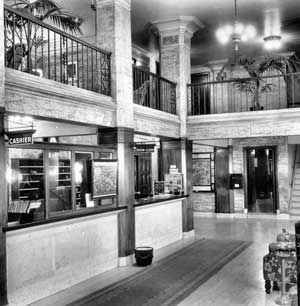 But pulling the hotel up by its bootstraps is anything but easy. Remodeling a hotel inside a 1920s framework provides many challenges, and Winslow is quick to acknowledge, and address those issues.

The homeless and drug addicted often set up shop right next to the hotel. Sirens blare through the streets day and night. A Greyhound bus station, some bail bondsmen and a jail surround the hotel.

Jerry Morrison, a local hotel consultant describes it as “one of the least desirable hotels in San Diego.”

“Oh my goodness,” he said during a phone interview Monday. “I think the best use of that hotel would have been to tear it down and start over again.”

Morrison said that the difficulties of building in a 1920s framework are massive and that the Winslow’s only saving grace would be to understand the challenges they face.

“That’s the most important thing that they be realistic about the project going into it,” he said. “People like to kid themselves. They like to put a pink bow on a pig and say it’s a show horse. But it’s good that they know what they’re going into this with and the challenges they’re facing.”

Winslow recognizes the criticisms of her hotel. She hopes that what age does to a fine wine, youth will do to the Sofia. She and her husband plan to keep the neo-gothic styling of the exterior, while bringing a much-needed overhaul to the dated interior. A refurbishment of the building’s façade will follow within a few years.

“It will feel, it will smell, it will look like something that’s just built,” Winslow said. 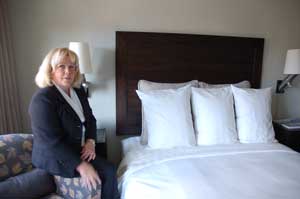 Owner Judi Winslow with a room in the new Sofia. Photo: Sam Hodgson

Everything, from the hotel’s name right down to the vanity sink, was hand picked by the Winslow’s, along with the designer Anjum Razvi and architect Richard Bundy.

The interior is meant to give a feeling of nature. Fossil art will adorn the walls and shelves; the carpet is embedded with a fern pattern; and even the curves of that sink scream “au naturale.”

What was once known as a dirty, downtown dump will now have the amenities of home, and more: Wi-Fi access in the lobby; high speed DSL in the rooms; 20-inch flat screen TVs; valet parking; a gym; and, for those with a bit more flexibility, a yoga room.

And as for the name Sofia, Winslow had a few reasons for hand-selecting that aspect of the project, as well.

And lastly, Winslow admits with a blush, giggle and smile. “It’s also one of our granddaughters names.”