Biomatrica, run by the husband and wife team of Dr. Rolf Muller and Dr. Judy Muller-Cohn, makes a room temperature DNA storage product called SampleMatrix. SampleMatrix’ dissolvable dry storage medium holds DNA samples in a plastic container along with a synthetic polymer. A scientist or researcher can add liquid to the sample and polymer, and the polymer essentially shrink-wraps around the DNA sample, storing it. Add water to the sample-polymer mix, and the sample is useable again. 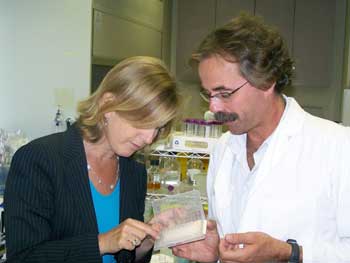 Muller estimated this system is 20 times less costly than the current method of storage, freezing. Companies and organizations often have warehouses full of large, expensive freezers that spend a lot of costly energy keeping samples as low as minus 80 degrees Celsius.

“As a result of the era of genomics, we started having not ten, not hundreds but thousands of samples generated on a daily basis,” Muller-Cohn said. “We had this situation in our own labs and we thought there’s got to be a better way to store and ship our samples.”

Both molecular biologists by training, Muller and Muller-Cohn were skiing one day and trying to think of a better way to store samples, and came upon the idea of anhydrobiosis, a naturally occurring mechanism used by some organisms, including sea monkeys. Tiny organisms that live in very dry places like the Sahara Desert and Arctic Circle can perform the process of anhydrobiosis, and form a protective cyst around themselves that keeps them protected and alive without water for as long as 120 years. Muller and Muller-Cohn recreated the process chemically, making the synthetic polymer they now mix with DNA samples. They discovered chemicals that recreate the process, patented the mixture and started Biomatrica last year. They began selling products several months ago. While their primary product is the SampleMatrix, Biomatrica also makes a software program for cataloguing samples called SampleWare and SampleGard, a storage and transportation unit.

“We can store DNA, RNA, cells, proteins,” Muller-Cohn said. “Being a small company, a startup, one of the goals we had was to generate revenues and to really start producing products so we attacked the DNA market first.”

Muller-Cohen, who has worked as both a scientist at Mycogen/Dow AgroSciences and as director of business development at a genomics company, serves as president and chief executive officer of Biomatrica. Muller, a former Salk Institute scientist who’s worked at numerous biotech startups and was most recently a director at Scripps Research Institute, is the company’s chief scientific officer. Both received doctorates at the Pasteur Institute in Paris, France.

By focusing only on DNA, Biomatrica has been able to attract numerous companies and organizations, including Johnson & Johnson, the US Navy, the National Institute of Health, Quest Diagnostics, NASA and the Salk Institute. As genomic research expands, Muller said the market for the product should only expand more. “Everything hinges around it: new drug development, DNA profiling, forensic new technology like you see on CSI. All of that became a reality through the developments in biotechnology, technologies development,” he said. “But the byproduct is, how do you store these samples?”

Biomatrica is privately held and while the question of going public brought smiles to Muller and Muller-Cohn’s faces, they said they have no plans to do so any time soon. For now they are still raising capital to expand their current staff of eight employees. Raising funds has not been especially problematic for the company (at a recent round of fundraising they had to turn some interested parties down) but they said they are always looking to raise capital. Friends and family largely back the company right now, but Muller-Cohn said they would like institutional funding.

“We’re a small company so what we’ve done is we’ve commercialized something on a very limited budget, but there’s a need,” Muller-Cohn said. “All of those important institutions have bought so it really shows that there’s a need.”

Send your thoughts and comments to Elizabeth.Malloy@sddt.com