Trump draws attention in and outside of sales event

Condo buyers crowded a ballroom in the Manchester Grand Hyatt Friday to take the first crack at what is billed as a world-class property along a premier parcel of coastline: The Trump Ocean Resort in Baja, Mexico.

As sales associates scurried about making sure the prospective condo owners were well taken care of, the buyers huddled around scale models and discussed the majesty and beauty of the property and the prime beachfront it overlooks.

But on a corner outside the hotel, a small cohort of environmentalists painted a much different picture of the stretch of coastline.

“It’s essentially fraud for him to sell this project as sort of a Caribbean-style white sand beach when in fact it’s one of the most polluted beaches in North America,” said Serge Dedina, executive director of the Imperial Beach-based environmental organization Wildcoast. “So our message to Donald Trump is ‘Dude, you’re fired, because you made the strategic blunder of investing in a project in Mexico’s most polluted beach.’

“Or, we’d like to give him the Nobel Prize for environmental protection by sitting down with us in our office in Imperial Beach and working with us to get these beaches cleaned up.”

Trump’s project is located just 12 miles south of the U.S.-Mexico border, about 30 minutes from San Diego. The developers tout the location as the most desirable part of the project -- and buyers seem to respond to the placement as well.

On Friday, inside the Hyatt, David Pham, a 45-year-old financial services manager from Huntington Beach, Calif., said he had two reasons for buying one of the oceanfront properties. 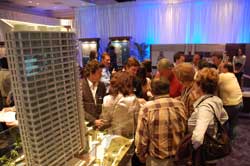 “It’s two hours away and I’m a surfer,” Pham said, situated in front of signs depicting the Baja coastline. “I’m praying. I haven’t even looked at where it's at yet. We’re going to go right after this and I’m hoping there’s a good break line right in front of the hotel.”

And apart from the swells that hit Baja’s beachfront, Pham had one other important consideration.

“Trump,” he said. “This is the Cartier of hotels and living.

“You walk through a Trump hotel -- it’s not a Sheraton, you know.”

While Dedina cautioned that effluent seeps into the ocean right by the property, officials representing the development said the protest was unrelated to the 562-unit condo hotel. 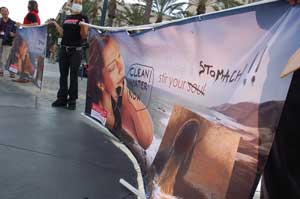 “My understanding is they’re just using this as a platform for their case,” said Chris Lyman, a spokesman for the project. “They’re just using Trump’s name to bring attention to their issue.”

Dedina said, however, that Trump should be concerned about the problem and has the power to help clean up the Baja coastline.

“The problem is so bad that the sewage is actually blowing not just into Donald Trump’s project, but ... north into Imperial Beach and Coronado,” Dedina said. “So this is a huge problem. There’s no infrastructure to handle what’s called ‘The Baja Boom’ in this area. Donald Trump is just adding to the problem.”

Final sales figures for Friday’s event are expected to be released Monday morning. At a similar event in Waikiki, Trump reportedly set a world record for one-day sales, raking in about $700 million and selling all 463 properties in about four hours.

Roxanne Loughery, senior vice president of marketing for S&P Properties, which handles marketing for the project, said the company was hoping to sell about 80 percent of the condos on Friday, drawing in about $120 million of the $150 million potential sales.

“Waikiki was much more the exception than the rule,” she said, adding that 80 percent “is much more typical of S&P launches.”